Clam chowder is the soup so good it’s worth fighting for. Because opinions – and traditions – can be as strong as clam chowder is delicious.

Opinions can get heated and passions intense before we even talk about what to serve with clam chowder!

Many vehemently defend the rich creamy rich New England chowder against all newcomers. Rich, thick, creamy. Hearty with potatoes, salty with pork, and briny with clams.

Still others buck the tradition for a newer, lighter chowder, finding a pleasant balance and subtle heat in the herb-and-tomato-meets-briny-clam Manhattan variation.

But, there are many other variations from regions up and down the East Coast, from Florida to Maine – some with tomato bases, others creamier (like a stirry potato soup), and still others on the clearer side.

As Americans spread across the continent, chowder even followed them to the West Coast where salmon joined the fish-soup party.

Whichever type of clam chowder you claim as your own, controversy seems to be a key ingredient in this battleground soup.

You could argue, though, that the broad variety in preparations only point to the underlying versatility of the main ingredient.

Which suggests a wide variety of possible side dishes to enjoy with that steaming bowl of soup.

But with so many flavors and textures, endless possibilities can make it even more difficult to decide what to eat with clam chowder.

Worry not. We are here to help, and we have some delectable ideas.

There are some real classic combinations that can’t be ignored.

If you can grab a cold beer and a pile of oyster crackers with your New England chowder, you can almost smell the salt air and feel the ocean breeze.

A crisp, clean salad is another well-tested combination. And don’t forget that sandwich. Soup and salad. Soup and sandwich. Perfection!

What Goes with Clam Chowder: Our VIP List of Sides

Really, there are so many other answers to the question of what goes good with clam chowder.

So, we say, whichever briny broth you choose, roll up those sleeves and dig into these stunning sides.

1. Basil and Butter Corn on the Cob

This isn’t corn chowder, but you can still introduce corn here as a side.

The sweet, buttery, juicy crunch of corn on the cob is one of the most appealing contrasts to clam chowder’s silkiness.

This is what perfect summer evenings are made of.

Grilling is a great option, but so is the classic boiling method. And Jeanine and Jack over at Love and Lemons have some beautiful variations that will pair perfectly.

The little bit of heat in their Mexican corn on the cob would be delicious with one of the tomato-based or clear-brothed chowders. 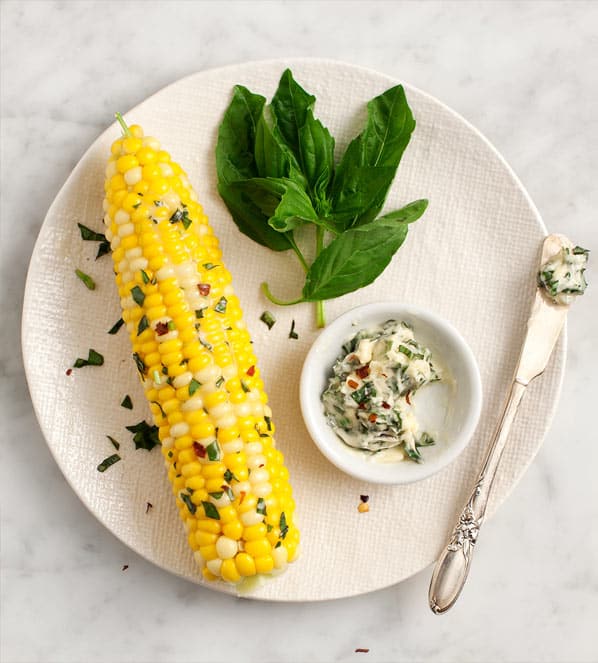 Get both recipes here: loveandlemons.com

With a tangy, silky dressing, crisp romaine and herby, crunchy croutons, it’s not difficult to see why Caesar salad goes so well with clam chowder.

The flavors and textures compliment the creamy richness of the New England-style chowder while lightening the whole meal up.

Soup and salad for the win! 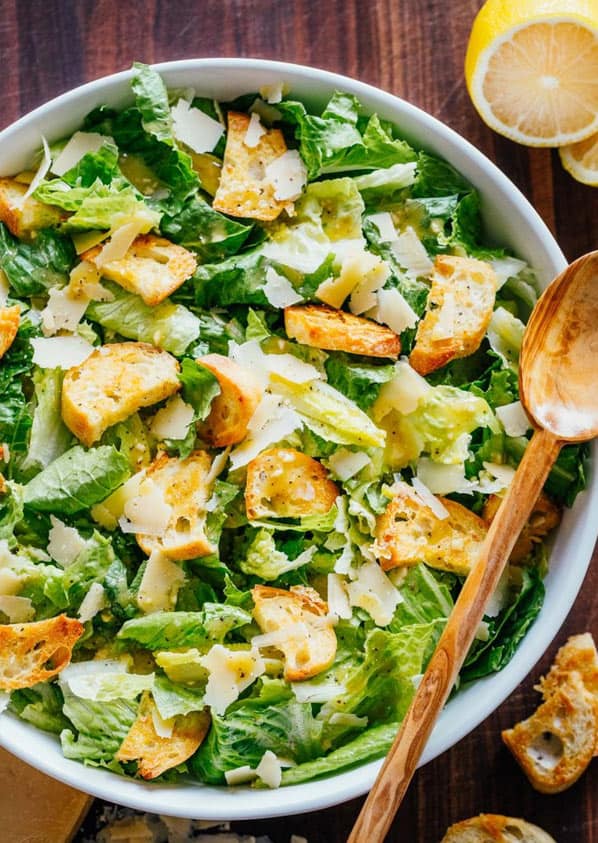 Natasha over at Natasha’s Kitchen has a beautiful version of this classic salad here: natashaskitchen.com

“Leaf” those packets of oyster crackers in the pantry for the evening.

Buttery, soft homemade bread like these cloverleaf rolls from Kristine at Kristine’s Kitchen are the new heroes of chowder.

Pull off one of those leaves and dive it deep into your bowl. Or sop the spills up from your place mat.

Whatever you do, don’t forget the butter.

And of course know puffy bread goes with clam chowder because many folks love to actually serve this soup inside a bread bowl! 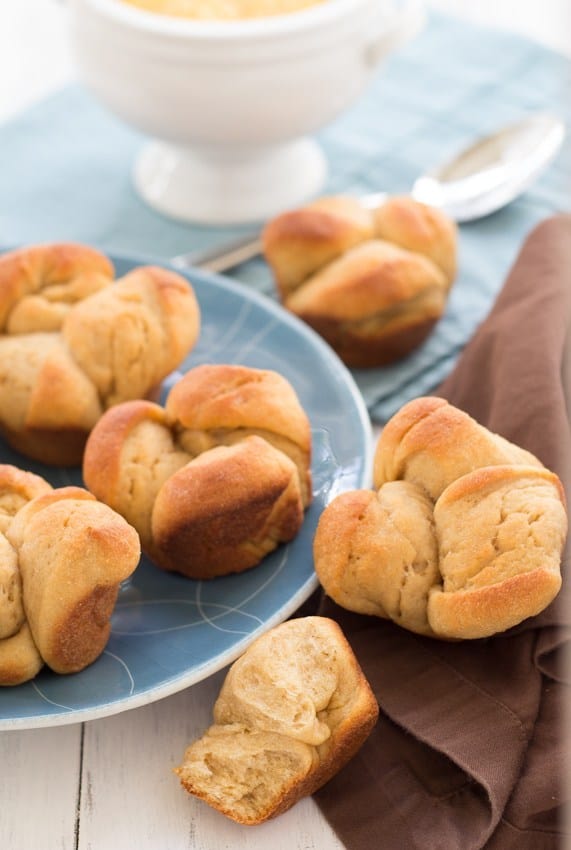 Or maybe you just can’t live without your oyster crackers. There’s no shame in that. We totally get it.

After all, clam chowder and oyster crackers really are such a classic combination. And for good reason.

Maybe you like to avoid processed food by cooking everything you eat. Or maybe you just don’t have the classic crackers on hand, and you need dinner on the table.

Either way, making oyster crackers from scratch is quicker and easier than you probably think. 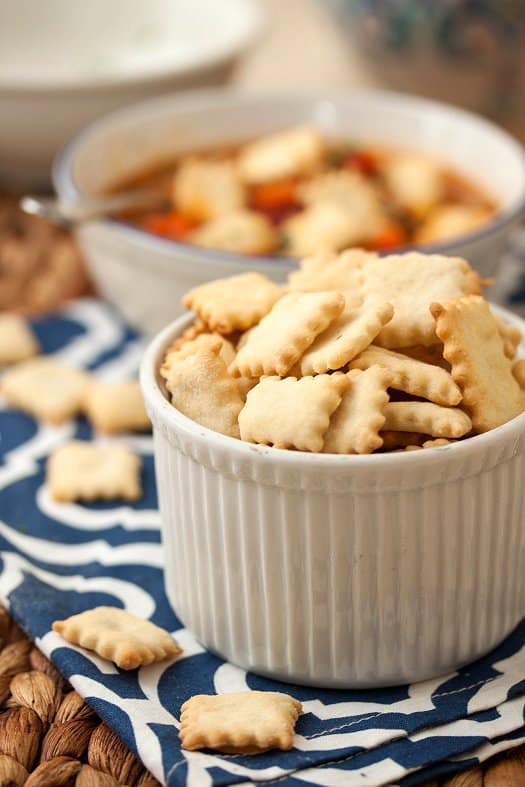 Laura from Tide and Thyme will help you bake them up in no time. Find the recipe here: tideandthyme.com

Mild and chewy mussels play oh so well with their brinier cousins, and this simple, classic preparation makes for a scrumptious accompaniment to any number of different clam chowder variations.

The clarity of flavors harmonizes fantastically with the cleanness of Rhode Island or Hatteras chowder, not to mention the tomatoey herbaceousness of Manhattan-style.  But, it’s also a nice contrast to the richness of New England chowder.

Mussels truly are the perfect “bite between bites” of chowder.

So, whip up a no stress batch of these lovelies, ala Natacha over at French Girl Cuisine and be prepared to swoon. 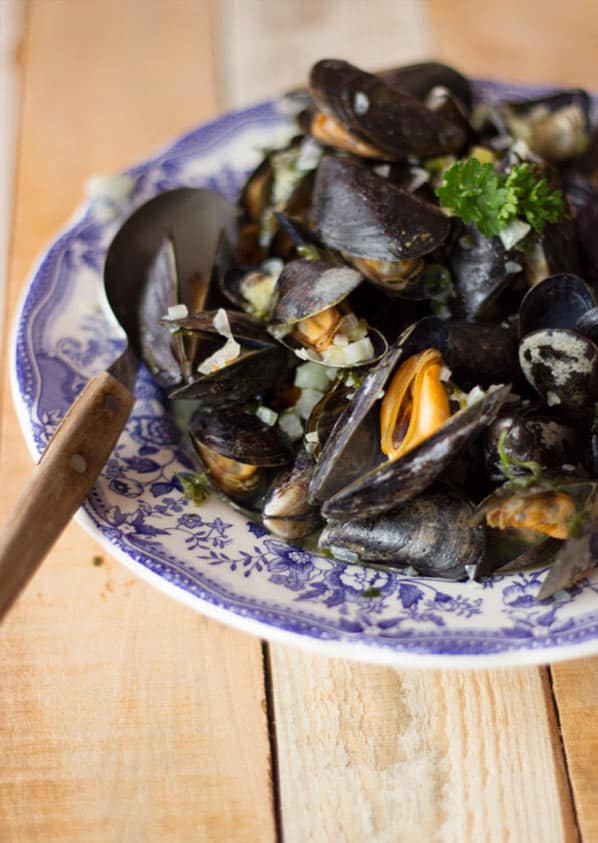 Check out the recipe here: frenchgirlcuisine.com

At the top of the list of what to serve with clam chowder is salty, smoky bacon. It’s actually a key ingredient in many regional varieties.

Sure, sure, everyone says things like, “Bacon makes everything better.” But this particularly true with a thick, creamy New England clam chowder. The salty pork flavors cut through brilliantly.

But really, what chowder wouldn’t be better with a bit of bacon beside it? Grab your bacon cooker, and make this happen!

Of the course, the sweet, supple scallop at the center of this epicurean package really holds its own too.

So, steer into that chowder’s natural flavor profiles and check out the recipe on this super helpful video.

This bright and colorful salad is loaded with sweet, savory, and creamy flavors and comes together in a snap.

Do you daydream about a rainbow of color that’s enveloped in tangy balsamic and goat cheese dressing?

We didn’t know how much we’d wanted to put goat cheese together with vinegar and oil until we saw this combination. 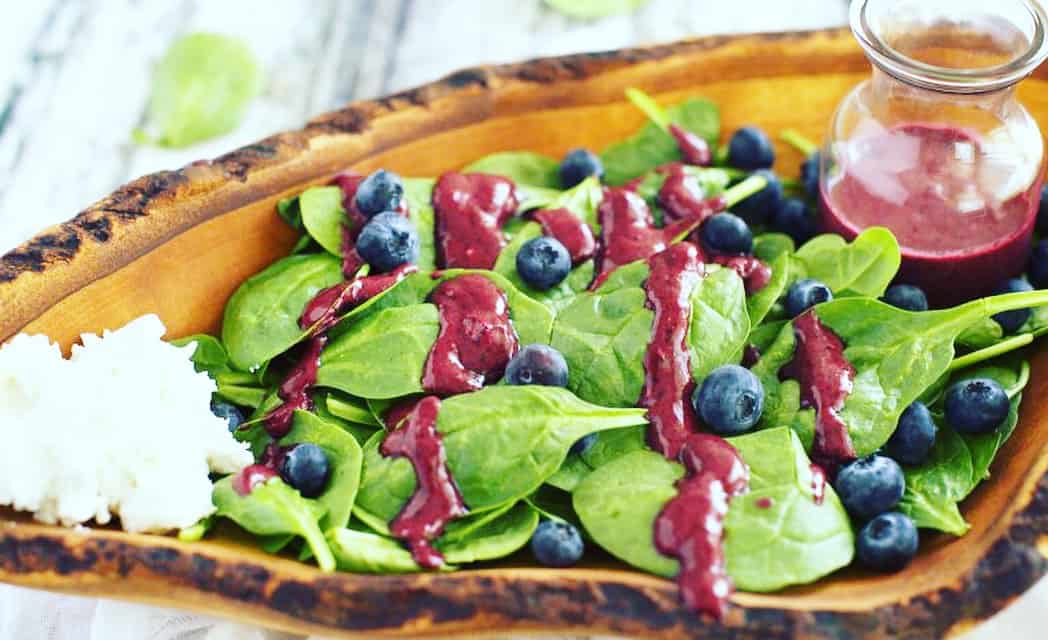 Annissa and Harper over at Simply So Healthy put together a salad that pairs perfectly with a milky, salty, clam chowder. Find the recipe here: simplysohealthy.com

♪ Corn in the chowder, cornbread on the side. ♪

It seems like it should be a little song, doesn’t it?

Melissa at Bless This Mess puts together a skillet cornbread that’s worthy of its own little musical ditty. It’s sweet and savory and sings in perfect tandem with corn chowder.

Bake this bread while the chowder is merrily cooking on the stove, and you’ll hit all the right notes for a perfect dinner. 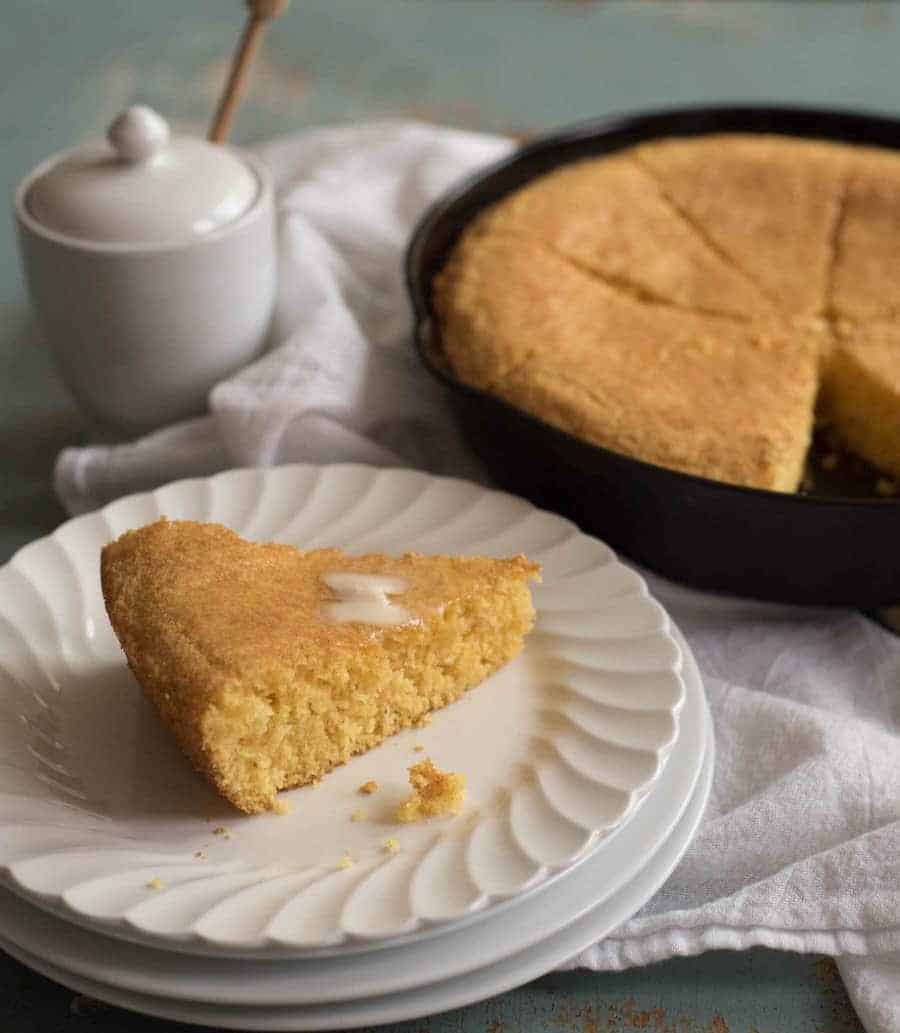 How can something so simple be so incredibly delicious?

It tastes so authentic you would swear you were dining on a picnic table one foot away from high tide on the Atlantic (perhaps with some shrimp?).

The perfect side dish for clam chowder? Indeed. 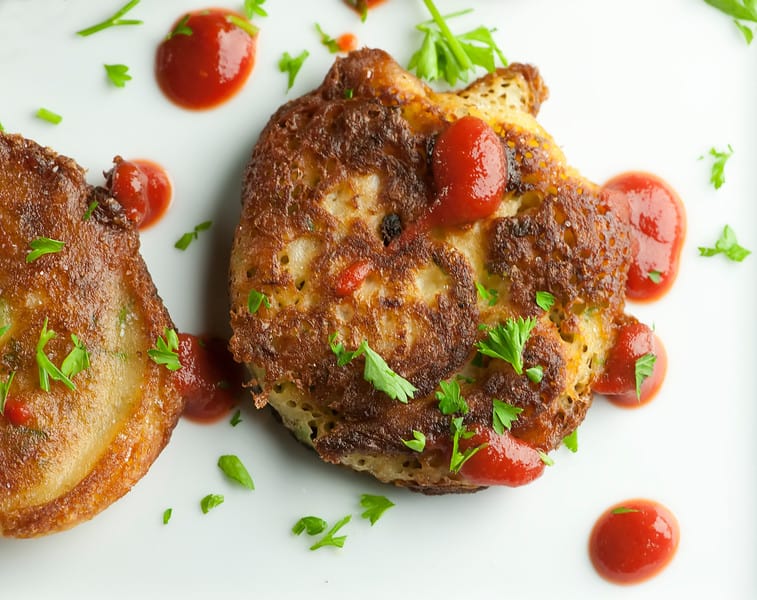 Kate at Framed Cooks pulls these insanely delicious bits of crunchy goodness together with just seven ingredients. Check out the details here: framedcooks.com

Cat and Melinda over at Homemade Interest share a version of this classic salad that’s the epitome of the sweet, savory, tangy, and refreshing goodness.

Do you know what loves lemon and apple cider? Clam chowder. 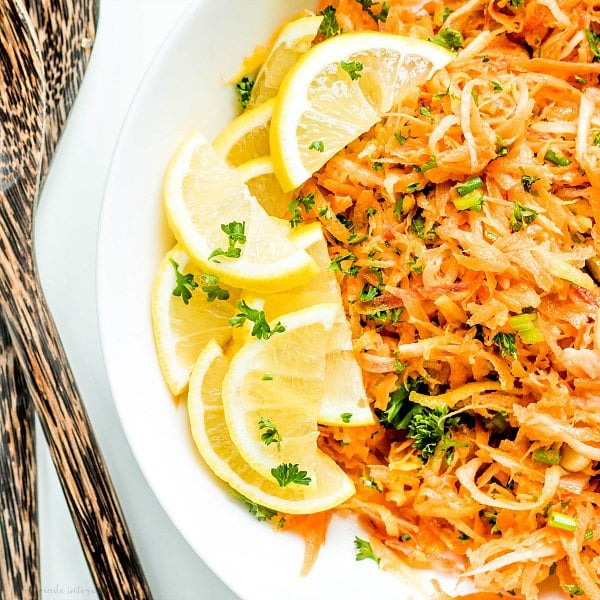 Indulge in this fresh side dish to creamy clam chowder by clicking here: homemadeinterest.com

Fries served alongside clam chowder are a simple, satisfying meal, so there’s no need to wander too far from the simple and rustic!

This is a classic combination with a little twist.

Who needs a dipping sauce when you can enthusiastically plunk these little planks of flavor into clam chowder?

Dress these up or keep them simple – you can’t go wrong. 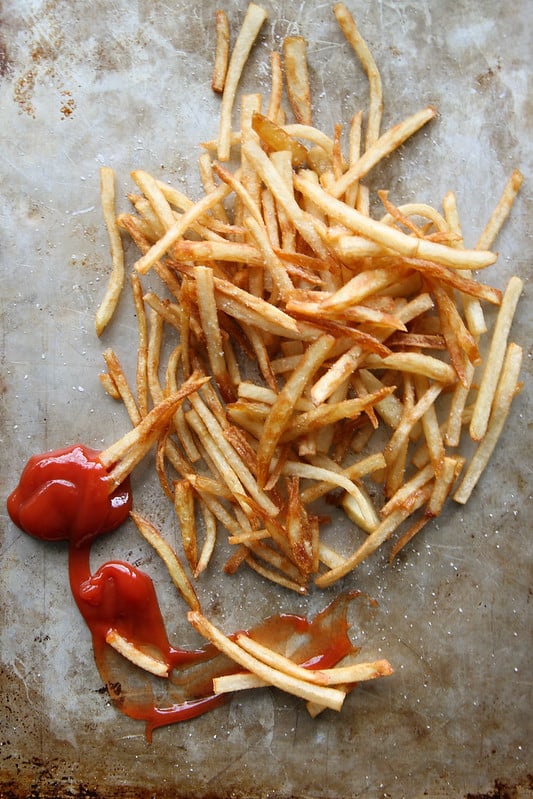 Check out the recipe from Heather over at her blog Heather Christo: heatherchristo.com

And because we know a good cold beer is the perfect accompaniment to a creamy clam chowder – how much better would it be as a base for an ooey, gooey, cheesy, perfectly browned bread? 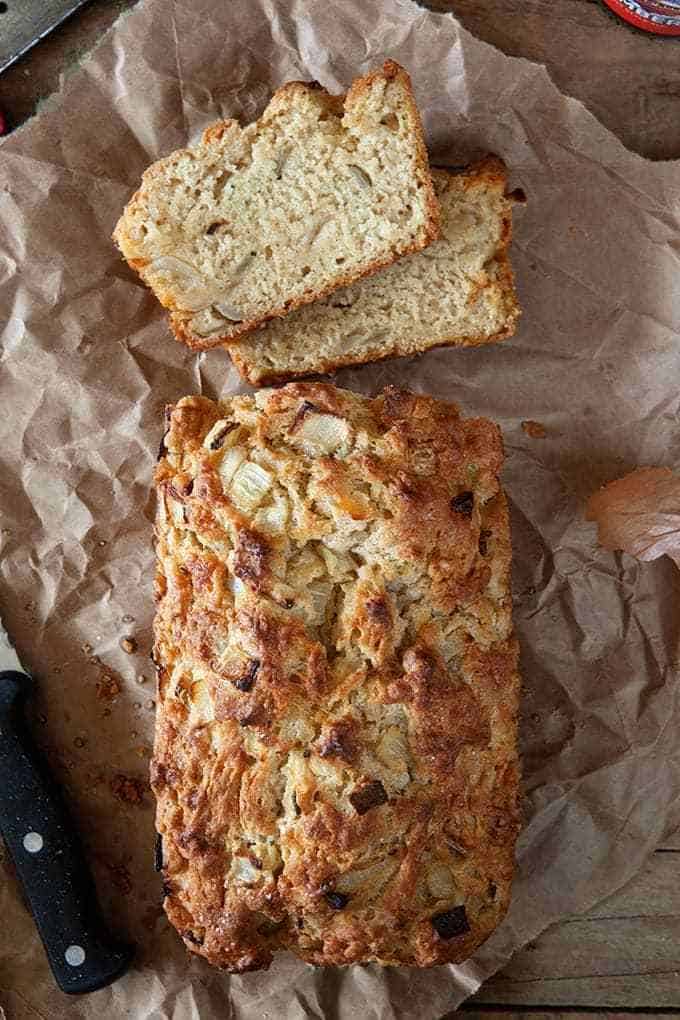 Allison at Some the Wiser has a simple and amazing beer, onion, and fontina bread that longs to be served on the table with clam chowder. Follow Allison here: somethewiser.danoah.com

On the side of leaning into traditional regional foods with a twist, this recipe made us say, “Whoa!”

Classic New England red flannel hash gets a little fancied up with the addition of radishes in addition to the bacon fat, sweet potatoes, and beets.

How much beauty can one plate hold?

Serve this family style with a steaming soup terrine of clam chowder and watch everyone race to the table. 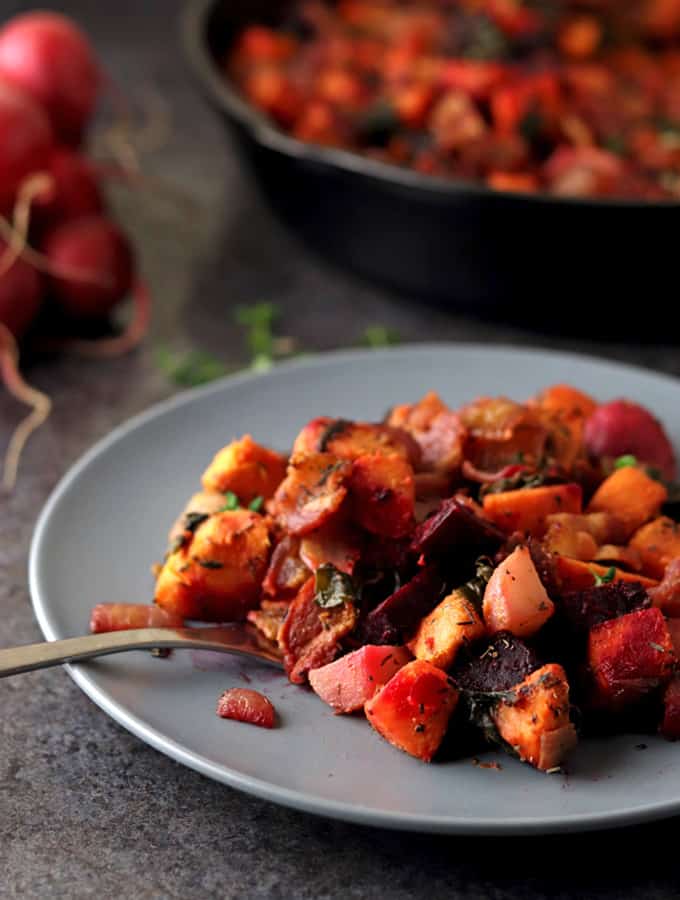 Kristen over at Wholesome Within has the delectable recipe here: wholesomewithin.com

When the height of New England produce is in season, what are the first things we all think of?

Sweet corn yearning to be cooked the day it’s shucked.

Tomatoes weighing heavy and hearty on the vine.

Cucumbers that crunch with joy when they’re sliced.

And improbably-large bundles of basil that can double as anise-scented flowers filling vases in every room of the house.

When those ingredients are tossed with creamy and savory feta, they marry perfectly with clam chowder.

This side dish is perfect for an impromptu dinner party after a day boogie boarding off the coast of Maine. 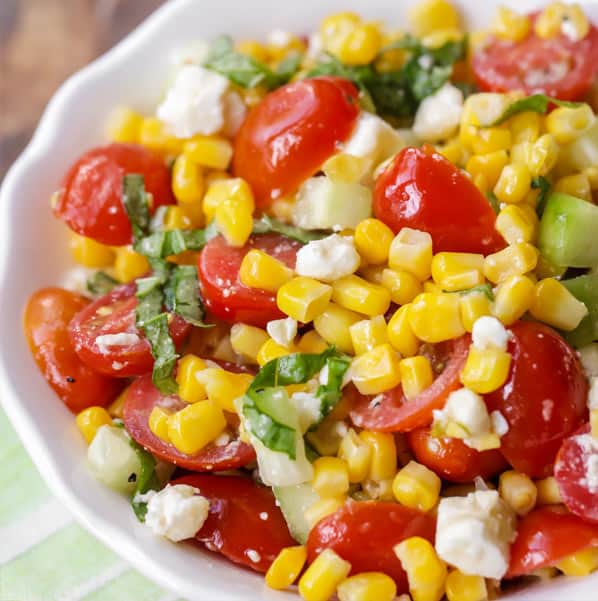 Grab the recipe from Krystyn over at Lil’ Luna here: lilluna.com

And finally, what can be better than a briny coleslaw loaded with two types of cabbage, scallions, carrots, and celery seeds?

This tangy coleslaw begs to be served with clam chowder for the perfect date night of yin and yang, Ross and Rachel, Marge and Homer. 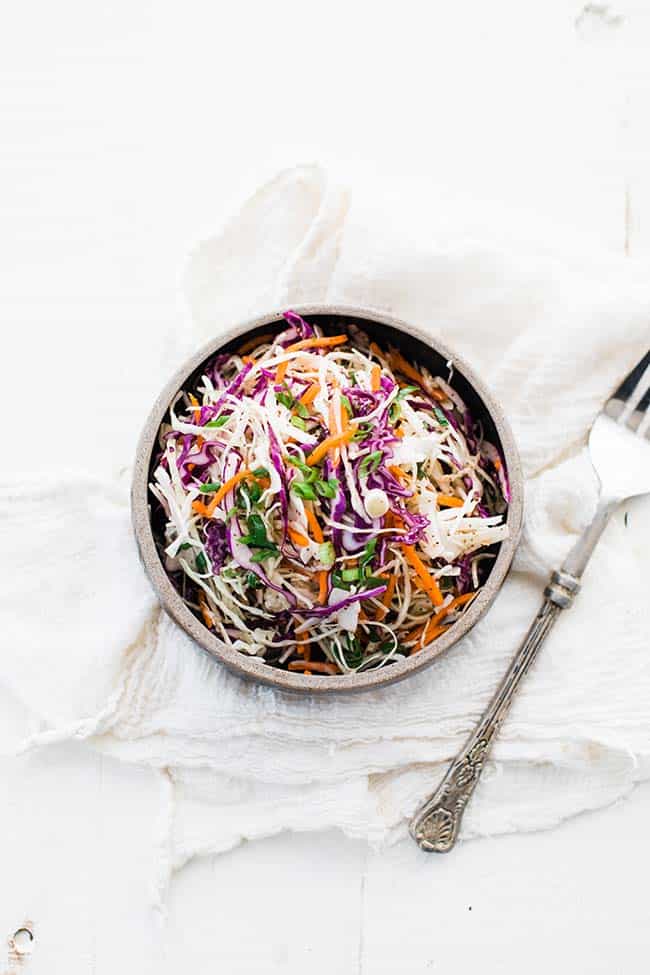 Let Billy over at Billy Parisi give you the rundown on the recipe: billyparisi.com

What to Serve with Clam Chowder – FROM START TO FINISH

Don’t forget appetizers or desserts with a soup like this! Crudités with a dip or hummus, crostini, herbed cherry tomatoes in pastry cups, cucumber slices with fresh dill, fresh briny oysters.

So many opportunities to show of contrasting and complimentary flavors that lead into the main act.

And don’t neglect the chance to serve a decadent dessert. 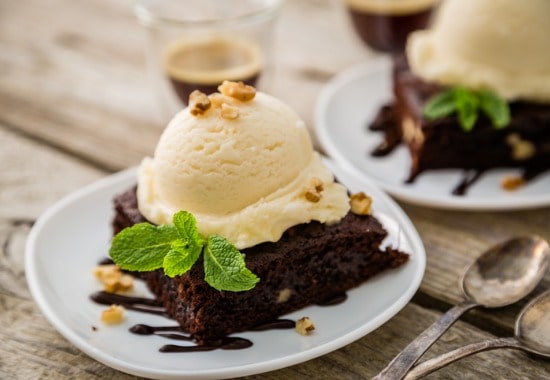 If you think straightforward, traditional, and satisfying you can’t go wrong.

Clam chowder grew out of fish soups made by fishermen in Britain and France on either side of the English Channel. These chowders used a variety of seafood depending on what was readily available.

The creamy New England style clam chowder traces its roots back to the 1700s when settlers in the region took advantage of the bounty of clams they found. 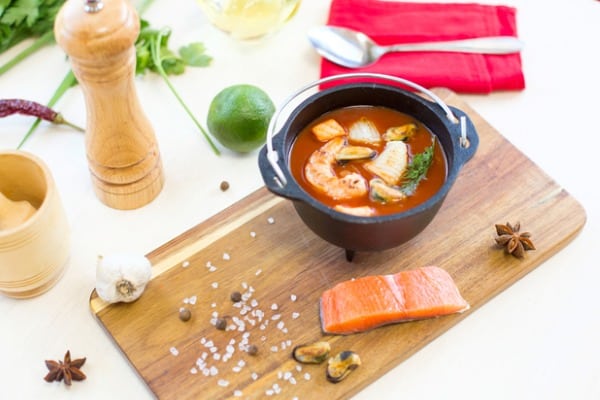 The moniker “chowder” is thought to have in its roots in the word Chaudière, French for a cooking cauldron.

The first written clam chowder recipe appeared in 1751 in the Boston Evening Post. Then, 100 years later, Herman Melville waxed poetic about the chowder’s aromas and textures in his classic novel Moby Dick.

That’s Not a Chowder! This Is a Chowdah!

Manhattan chowder with a lighter tomato broth appeared later, in the 1930s, and has been ruffling feathers ever since.

One Maine legislator pushed for a 1939 bill that would have prohibited the use of tomatoes in chowder.

A year later, Eleanor Early wrote in her New England Sampler that the “terrible pink mixture” was “only a vegetable soup and not to be confused with New England Clam Chowder, nor spoken of in the same breath.”

No less a culinarian than James Beard flatly called the Manhattan variant “horrendous.” 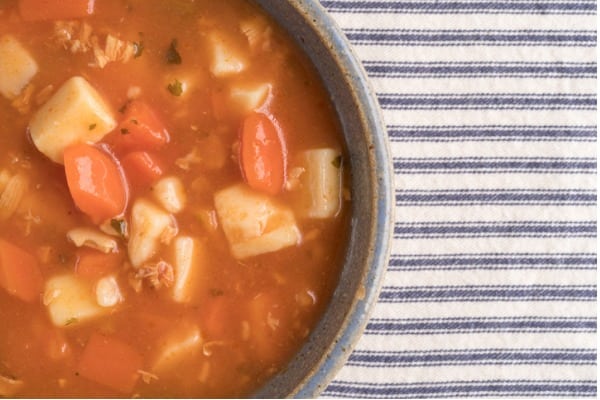 Opinions remain strong to this day, and the brunt of the traditionalist’s ire remains fixed on the Manhattan variation, despite the fact that a wide range of regional preparations and ingredient combinations exist:

We choose not to take sides (unless you’re talking about the sides for what to serve with clam chowder!). We say just sit back and enjoy a steaming, succulent bowl of the ocean’s bounty.

Check out these side dishes for your other favorite seafood dishes. 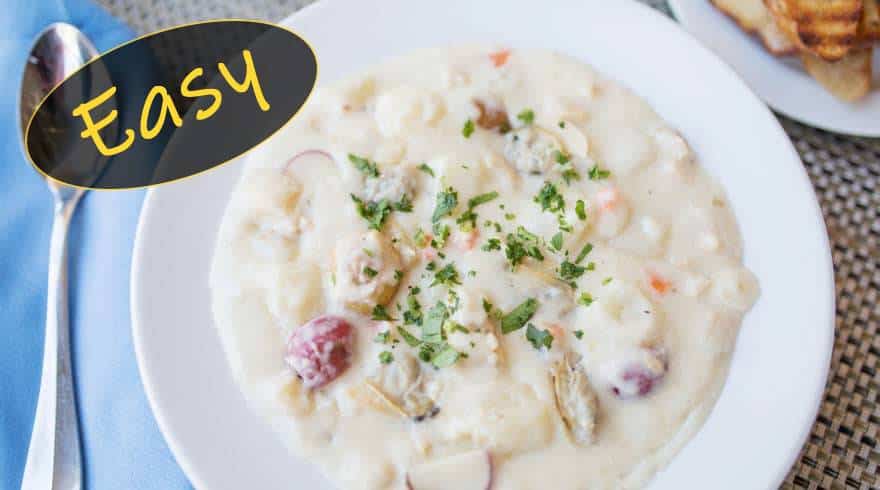 What to Serve with Clam Chowder

Ideas and side dish recipes to eat with Clam Chowder
Course: Side Dish 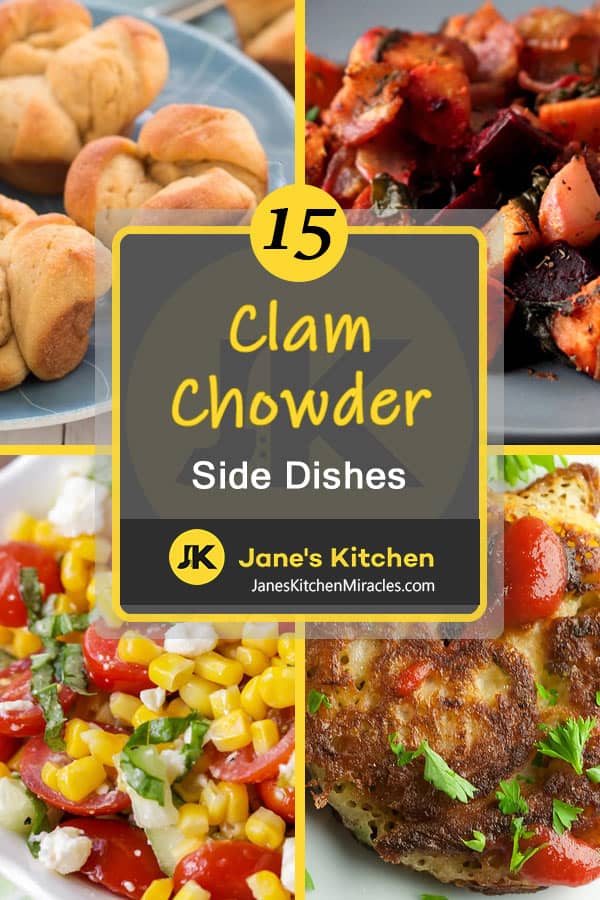