Potatoes are always so undeniably comforting, no matter how you prepare them. So, what if you take that humble potato and transform it into the star of a hot and hearty soup?

Well, then you’ve taken comfort to a whole new level.

I don’t care if you’ve laid down on a bed of angel feathers or been massaged by nymphs while wrapped up in a “blanket” of kittens, there’s nothing more comforting than a bowl of potato soup.

Potato soup never fails to sooth the soul and warm the cockles of the heart.

This is true of potato soup’s many variations.

A hearty vegetable stew with potatoes as the star? Come to momma.

A lighter, herby concoction such as potato dill or potato leek soup? You betcha.

Or go full carnivore with a deeply meaty stew featuring potatoes as the co-star, like a classic steak and potato soup.

But as tempting as it might be to just keep our meal indulgently simple with just potato soup (like you would with say a corn chowder), we should probably have something else to round out this ultimately comforting meal.

So, you’re wondering what to serve with potato soup?

Well, the beauty is it’s nearly as versatile and welcoming to other flavors as it is comforting.

So, whether you’re looking to make potato soup the star or the best supporting dish, we’ve pulled together some of our favorite ideas to make your meal shine.

What Goes with Potato Soup: A List of Delish Dishes

Now let’s round up those spuds and hone those knives, because we’ve got some great recipes to start cooking up beside your favorite potato soup.

No kittens. No nymphs. Just potato soup and a bunch of delicious side dish ideas.

And in this case, it’s a cooling, crisp salad that’s loaded with citrusy meyer lemon, bitter radicchio, and tangy pomegranates.

So, grab that sharp knife or mandolin and start shavin’.

We have a fantastically beautiful salad to assemble. 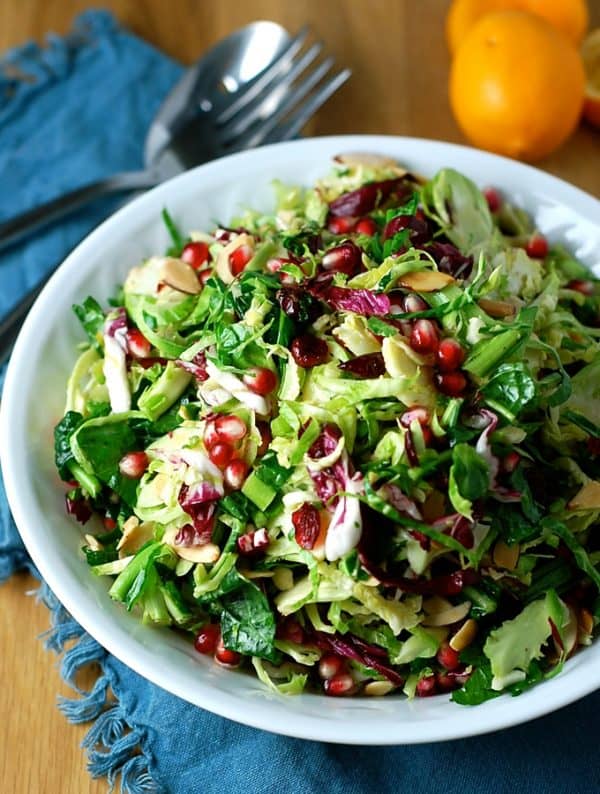 Check out Lucy’s recipe for all the sweet, savory, and nutty goodness at Turnip the Oven.

The brighter, bolder, and more beautiful the better, we always say!

Bring on the greens, the berries, the pears, and – the jewels of all the jewels – pomegranates.

Tie it all together with a tangy and sweet dressing, and we’re grinning from ear to ear.

Potato soup, meet the salad of your dreams. We know you’re going to love it as much as we do. 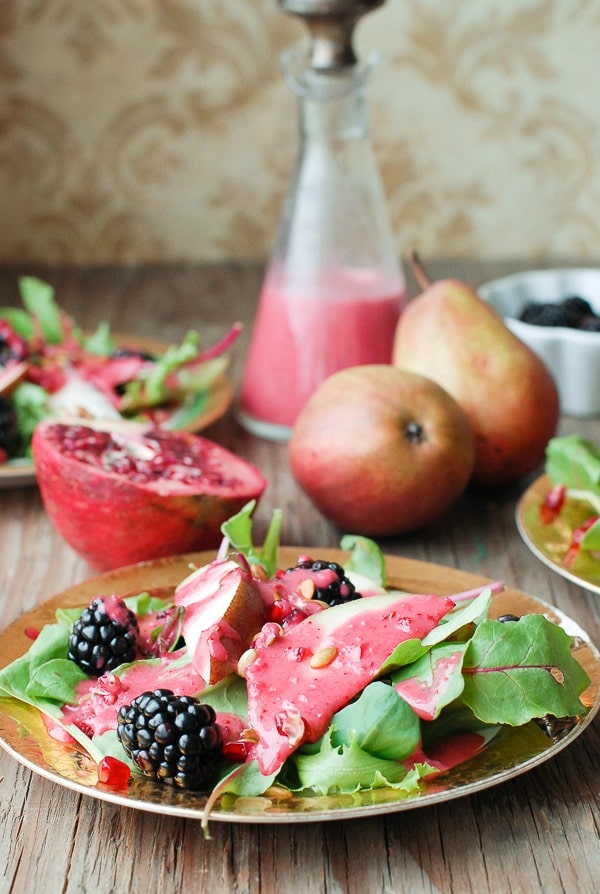 Grab the recipe from Toni at Boulder Locavore.

Sometimes when wondering what to pair with potato soup, we like to lean into the curve.

We love potato bread with potato soup, but we were wondering if there might be another potato-ey treat we could pop into the oven and have it come out golden brown and delectable.

How about potato puffs?

Especially when they’re loaded with cheese and bacon and topped with sour cream and chives.

Yes. Turning into the curve is as smart as our drivers education instructor told us when we were prepping for our learner’s permit. 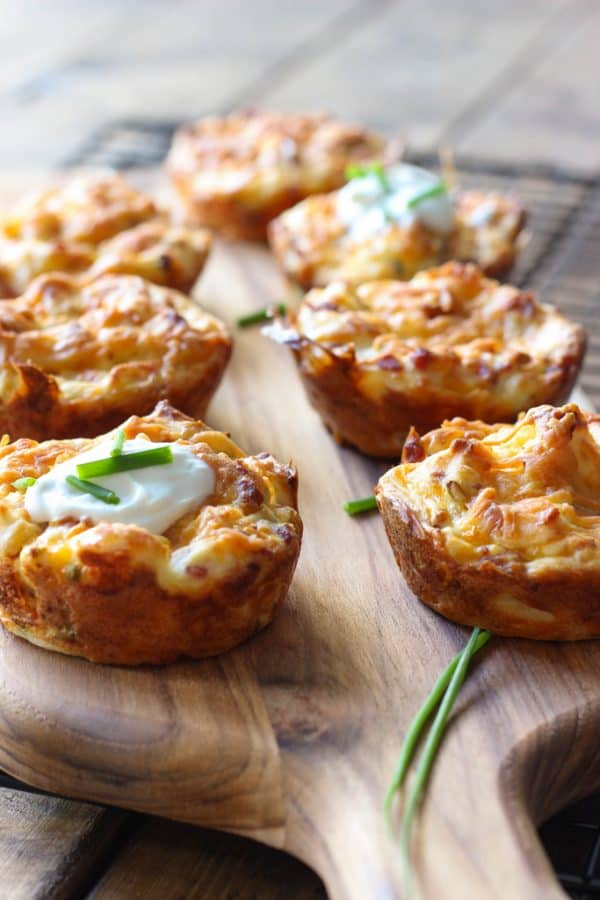 Grab all the goodness here from Farah at The Cooking Jar.

And we really love our salads loaded with earthy mushrooms and salty bacon.

Let’s throw in some boiled eggs for a bit of bright sunniness on the plate and toss it with a bouncy apple cider vinaigrette.

That’s what we’re talking about. 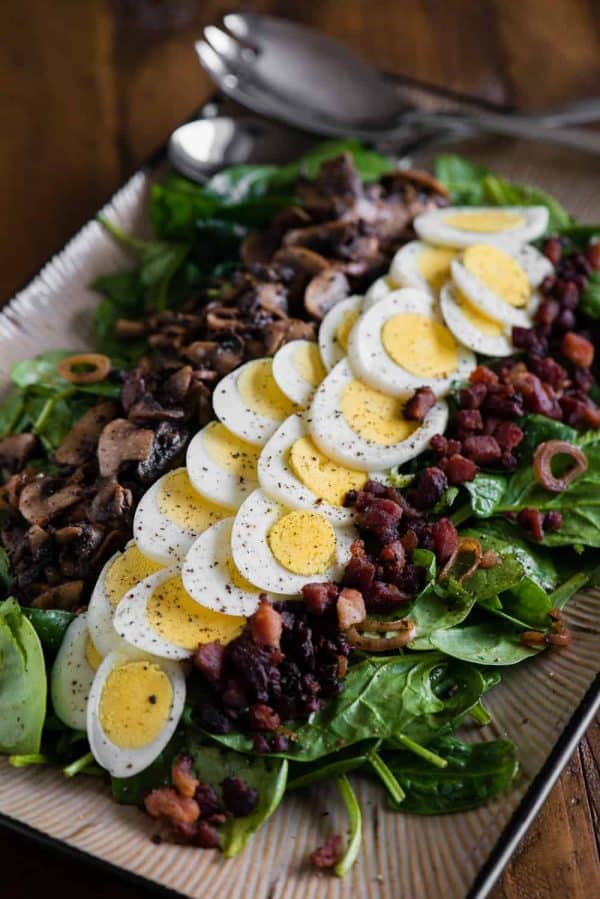 Grab Krissy’s recipe over at Self Proclaimed Foodie.

Bread is the stuff of potato soup’s dreams.

And soup loves bread right back.

We also love to kick our bread up a notch with flavors that you may not expect – but then wonder how you could ever bake bread without – like shallots and garlic. 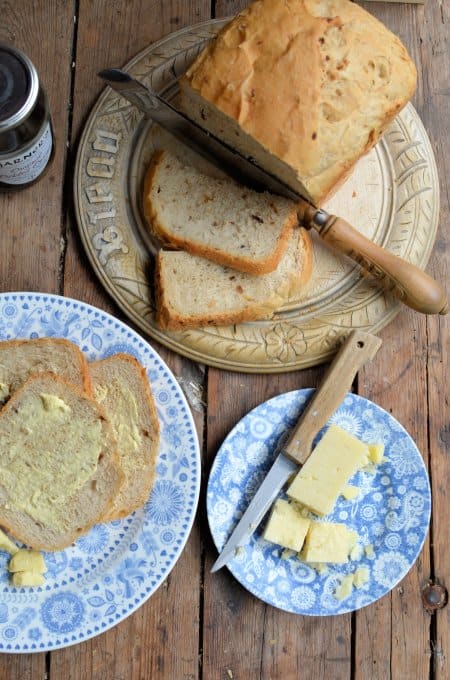 Check out Karen’s recipe at Lavender and Lovage.

Very savory kale loves to absorb any flavors it’s tossed in a pan with. A little spice, a little sweetness, a bite of garlic, and the tang of scallions are things that kale really takes to.

And all those flavors pair perfectly with a steaming mug of potato soup.

Sometimes if we’re feeling a little impish, we’ll just take sautéed kale and swirl it into our soup for a little extra sumpin’ sumpin’.

Dara has a perfect recipe for sautéed kale that we love over at Cookin Canuck.

And we love these crackers because they’re bouncing off the table with colors and textures. They brighten up the plate and they open the palate.

Sure, they’re healthy too, but that’s just a side benefit.

Here’s a fun video from Alice Friedemann about how to get those crackers from your oven into your mouth.

8. Arugula Salad with Apples and Pecans

And it doesn’t get any more elegant, simple, and flavorful than salads with fruit and nuts. Especially when the fruit is a cooling, crispy apple and the nuts are candied pecans.

Throwing some salty feta on greens brings the effortlessly stunning salad up a notch too.

A bowl of vichyssoise and this salad will make you think that you’re in a Parisian bistro.

And what could be better than that? Magnifique! 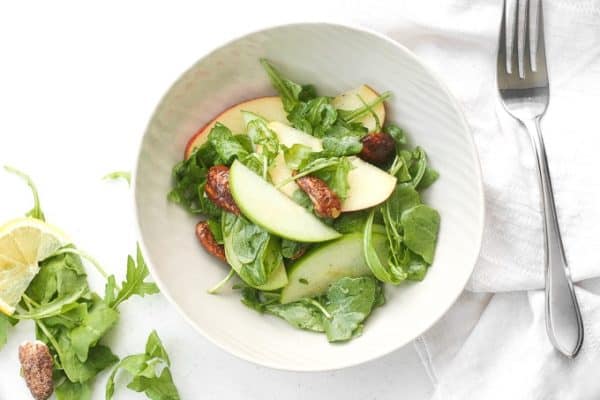 Check out Sam’s recipe at Ahead of Thyme.

We love buttery bread. If the bread doesn’t make you immediately reach for a napkin to wipe your hand with, the bread isn’t buttery enough.

And we’re not just fans of butter. When it comes to rolls, we also like a soft inside, a golden-brown crust on the outside, and a sweet and savory flavor that makes that makes our eyes roll backward into our head.

We discovered this recipe and it checks all of our boxes. Right down to needing to grab a napkin.

So when considering what to serve with potato soup, whip up a batch of these and watch everyone swoon.

How to Make The Best Homemade Dinner Rolls Ever!

We love a hearty salad with potato soup. And what could be heartier than a salad with bacon that’s piled high with veggies?

Quite often we think a vinaigrette is perfect for a meaty salad, but then we wondered how a creamy buttermilk ranch would pair with it.

Oh, yes. Creamy buttermilk ranch dressings are where it’s at.

And in this recipe, it’s literally “no muss, no fuss,” because the dressing ingredients are thrown into a mini-food processor and whipped up into a frenzy of creamy, decadent deliciousness. 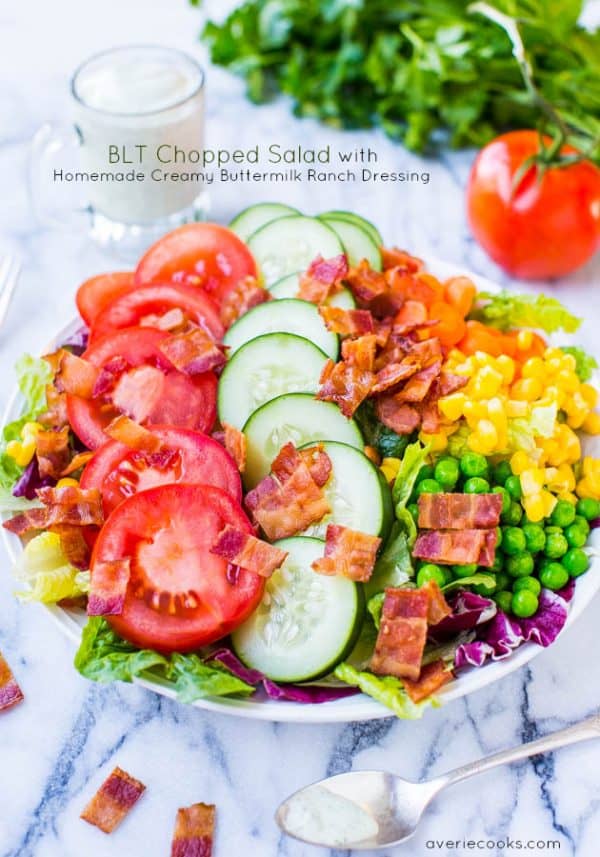 We love dipping things into potato soup. Bread, crackers, rolls, you get the idea. We think eating soup should be a bit of a tactile experience.

And what’s more fun to dip than pretzels? Note, when we say “pretzels,” we don’t mean the dry little guys that come in a crinkly sounding bag.

No, we mean big, soft, salty, rods of German pretzels that make our mouth water. They’re the perfect vehicle for potato dill soup. 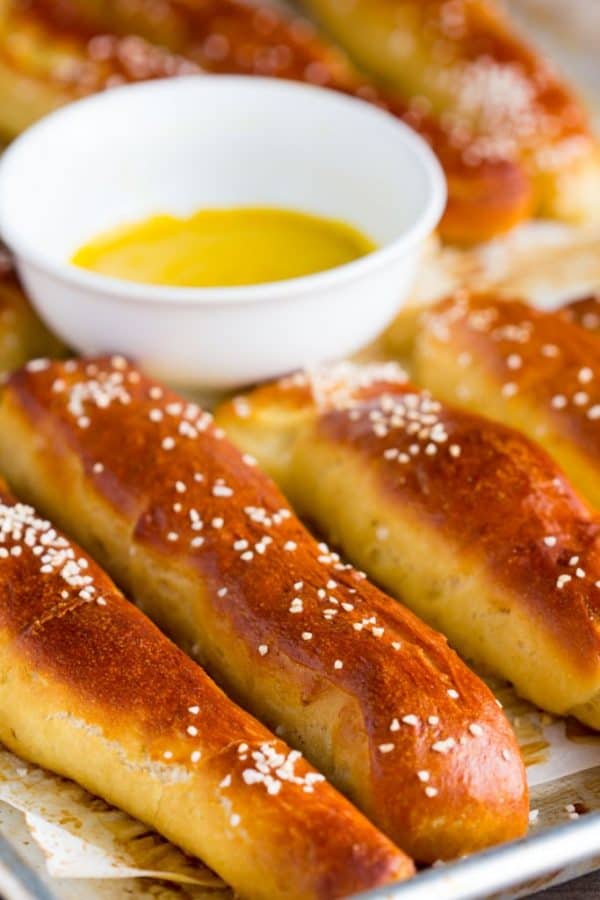 Melanie over at Gather for Bread has a recipe for some fantastic pretzels. Dig in!

We love big, beautiful side dishes that intrigue the eye and draw you instantly to them.

And then you find yourself standing in front of a bowl of salad utterly transfixed by its beauty and possibilities.

“I wonder if it tastes as fresh and bright as it looks?”

And then another thought pops into your head: “How amazing would this be with a bowl of potato soup?”

The answer is that it would taste amazing with a bowl of potato soup. 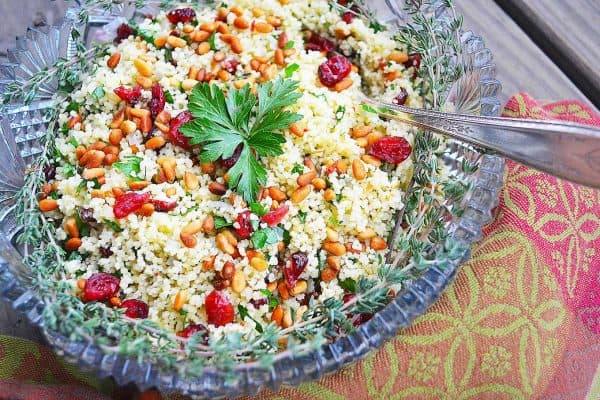 Wild rice salads are one of nature’s perfect side dishes. They’re bright, bold, and hearty and make the perfect backdrop for colorful ingredients.

How about some roasted sweet potatoes?

What’s more, all those stunning ingredients are elevated by being tossed in a lemon honey dressing that makes the rice tangy, sweet, and savory.

When life hands you gorgeous ingredients, it just makes sense to play with them. And then place them in a bowl and toss them well.

And then serve them up next to a hearty bowl of potato soup. 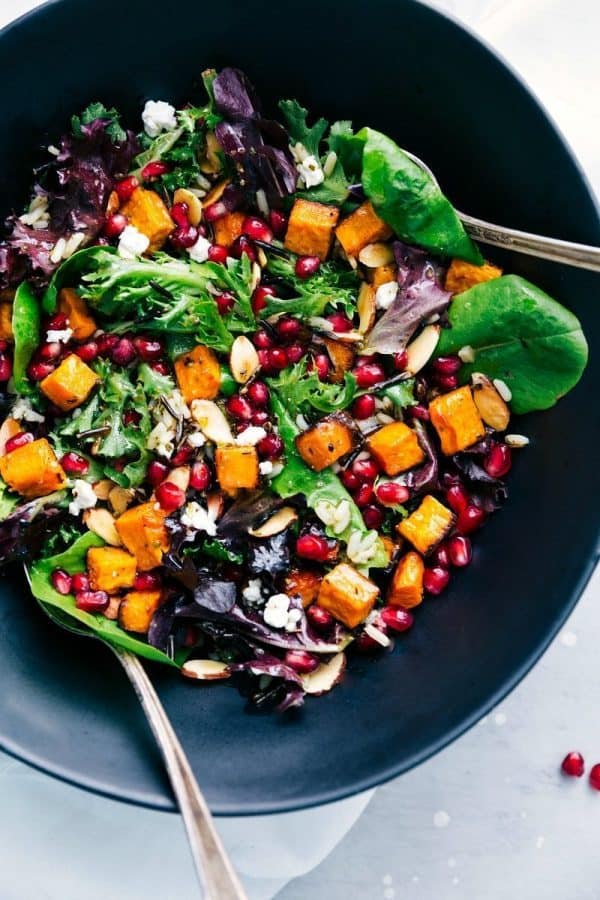 You can find the recipe over at Chelsea’s Messy Apron.

What to Serve with Potato Soup: From Side to Soup and Back Again

We’ve looked at a whole host of ideas to go with potato soup, but we’ve focused mostly on sides.

But what if you want your potato soup to be the side dish?

Well, steak and potatoes are hard to resist. Still, how much more elegant and sumptuous would that steak be with a creamy bowl of herby potato soup instead of a heavy baked potato?

So, it’s clear, a steak is what to eat with potato soup. Uh. Mazing. 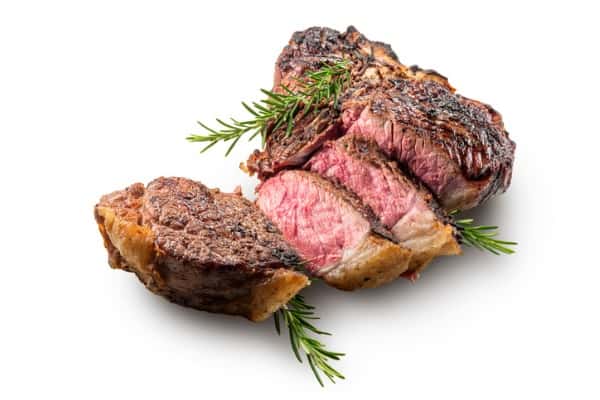 It’s worth remembering though, that potatoes also love fish. Remember, what seafood chowder doesn’t beg for hearty chunks of potato?

But, that’s just by way of example. What we’re talking about here is a beautiful bowl of soup beside a fillet of cod, a bowl of mussels, a bevy of seared scallops, or a lobster claw?

Talk about surf and turf, are we right? Beef tenderloin, anyone?

A Variety of Potato Soups

But, it’s also worth delving a little deeper into the just what we mean by “potato soup” in the end.

Most people probably have a specific, comforting idea of what potato soup “really” is.

But, there’s no reason to stick inside your comfort zone when it comes to this versatile star of many styles of soup. Get out into the world. Go on an adventurous trek and explore.

Here are a few of our favorites.

Hot, we call it potato leek soup. Cold, we call it vichyssoise. Either way we call it sumptuous, velvety, and delicious.

As we’ve mentioned, beef and potatoes are an amazing pairing.

And one of our favorite delivery methods for this irresistible pairing a steak and potato soup.

Potatoes get equal billing in the bowl, melding into one drop-dead delicious bite after another.

It’s one of the easiest dishes to make, and easily makes our list of the best Del Monte canned potatoes recipes.

Also, on the hearty side is a loaded potato soup.

Masquerading or not, bacon, cheese, sour cream, chives, and potatoes are always welcome.

But don’t forget the other veggies. 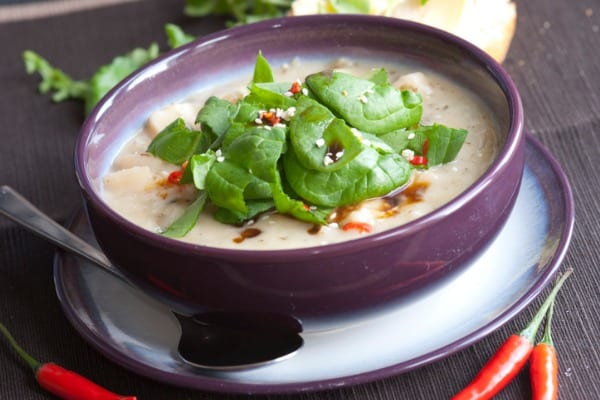 How about a rustic kale, bean, and potato soup? Or a potato and spinach soup with a hint of sausage or ham?

Or herby potato soup? Dill, thyme, rosemary, and tarragon are all great candidates for adding depth and surprise to the humblest of soups.

And don’t forget the chives and leeks. And a dash of vinegar never hurt a potato soup either.

The world of potato soup awaits you. Get out there and enjoy it!

While you’re at it, check out our ideas for sides for split pea soup to discover more options for these warm and cozy hot bowls of goodness.

Hopefully we’ve done a little bit to dispel the mystery of what to serve with potato soup. What are some your favorites? 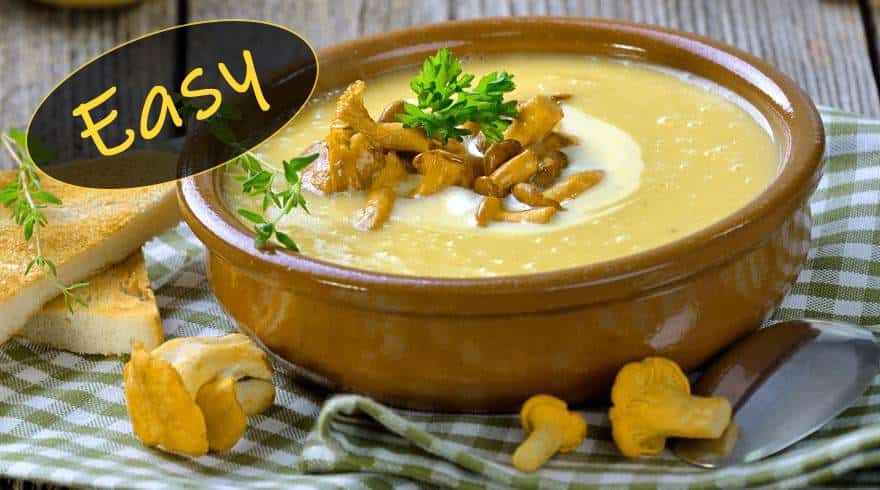 What to Serve with Potato Soup

Ideas and side dish recipes to eat with Potato Soup
Course: Side Dish 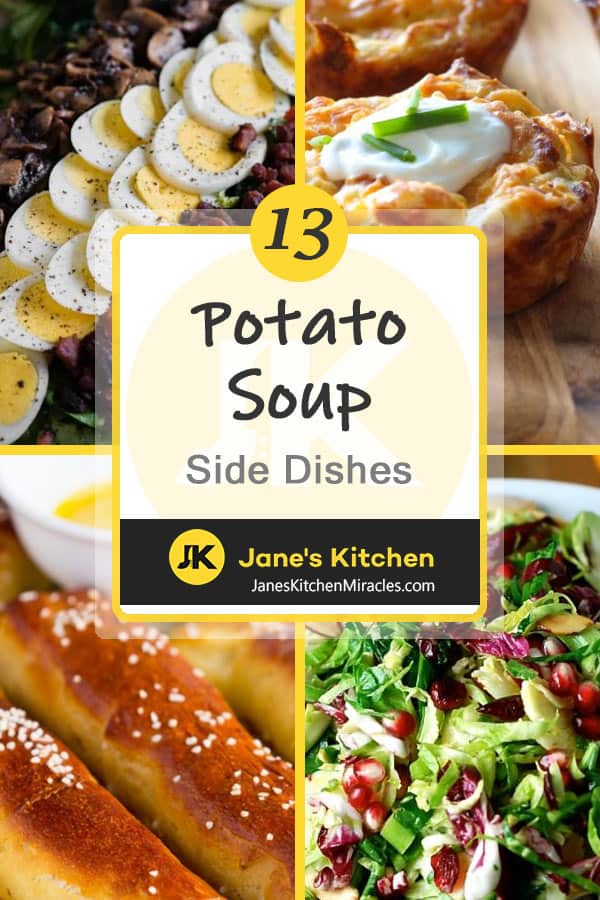