From Manhattan to New Jersey, Maine to North Carolina, and Seattle to Scotland, there are more types of clam chowder than you can shake a clam-digger’s drill auger conversion kit at.

This classic seafood soup holds a special place in American cuisine. And its many variations are a source of – shall we say – “lively” conversation.

Although we might think of a clam chowder as being from New England, food historians look further north to Canada and – even further – across the ocean to French and English settlers for the origins of this soup.

Although the etymology for the name “chowder” is murky – ideas range from it being named for a Creole cooking pot (“chodier”) to a French fish soup (chauderée) – our money is on “jowder”, a nickname for a peddler of fish in England. “Jowder” to “chowder” seems like the perfect lyrical lineage to us!

American clam chowders evolved from fish soups made by fishermen on either side of the English Channel.

These earlier French and English chowders centered on different seafoods depending on what was locally abundant.

The many varieties of chowders we now see in America grew from these same hearty roots and developed from different regional tastes or available ingredients, whether it was quahogs in Rhode Island or salmon in the northwest.

Cooking styles vary too – from thick and creamy to lighter and herby with a touch of spice – and there are almost more types of clam chowder than you can list.

Well, of course, it depends on what style of clam chowder we’re talking about.

Still, all the varieties share some key flavors – the succulent, tender morsels of the clams themselves contrasted with the textures of potatoes and other veggies, all bathed in a briny broth that makes the mouth water with every bite.

Of course, variations begin to part from there.

And Manhattan-style chowder brings the additional acidity of tomatoes to the broth.

So really, before you decide how to cook clam chowder – or even what to serve with clam chowder– the first thing you need to do is decide what type of clam chowder you want to make. Never fear, though. We’re right here.

We love a challenge, and we’re willing to wade into the wild and woolly world of regional clam chowders – and side-stepping the ever-present declarations about which one is best – to help you decide which one you want for dinner.

So, set down that clam digger’s auger, grab those clams, and let’s get cooking. 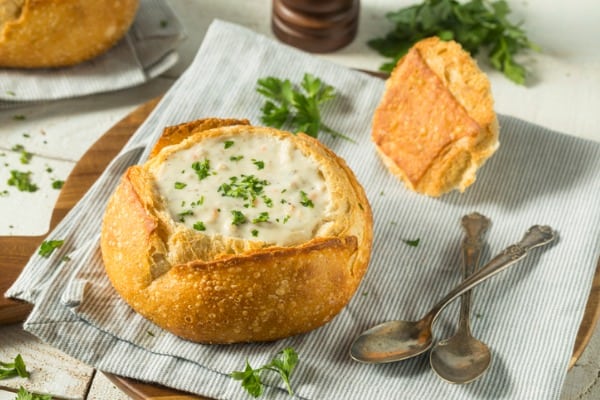 Tracing its roots back to the 1700s when settlers turned to the abundance of clams they found, New England-style clam chowder reigns supreme for many chowder lovers.

As the historic mother-of-all American clam chowders, what makes this type of chowder so well-loved? Maybe we should answer that question with another question.

What is New England clam chowder made of?

Well, it’s made with all the good things. Clams, potatoes, heavy cream, bacon, butter, celery, onion, and garlic, along with a sweetly blown kiss of herbs.

The salty savoriness of the broth and bacon make a joyful umami explosion in the mouth.

And when that’s combined with the sweetness of the clams, the creaminess of the potatoes, and the light bite of the garlic and onion, all is right in the world.

When we said it was filled with all the good things, we weren’t kidding.

So, how can you make your own?

Here’s the classic in all its glorious, resplendent, sumptuous deliciousness.

We’ve got clams. We’ve got bacon. We’ve got heavy cream, savory veggies, the perfect bite of garlic, and a breath of fresh herbs.

Everything about this screams luxurious comfort. 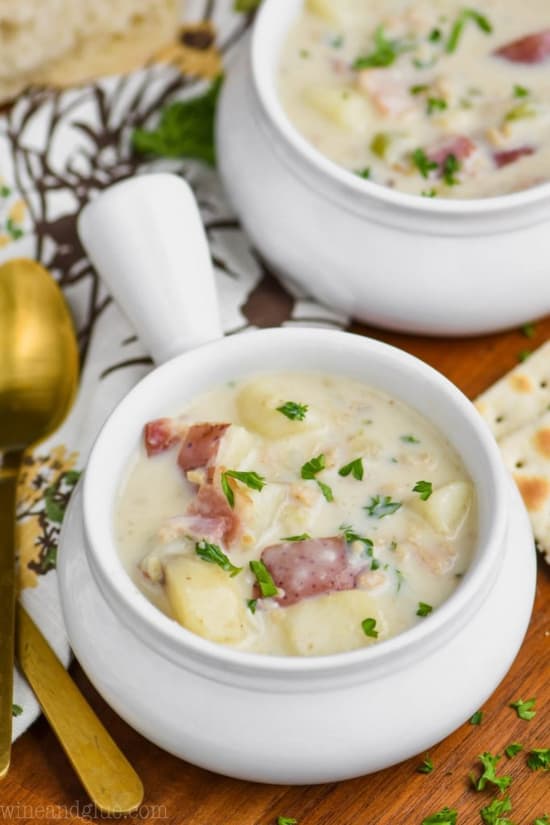 Grab that Dutch oven and check out the recipe from Lisa at Wine and Glue.

But maybe you already have a recipe that delivers all the flavors you want, but you’re still not getting that classic texture you’re craving.

While using high starch potatoes – such as russets – and a mix of milk and cream can make a pretty luscious chowder, sometimes you want a simpler and more consistent method to get that famous, creamy texture.

So, How Do You Thicken New England Clam Chowder?

One foolproof method for thickening chowders lickity split it to whip up a cornstarch slurry.

Just stir it well, and – bam! – it goes from watery sadness to creamy velvetiness in seconds.

Note: Careful not to don’t overdo it, though! Cornstarch is a powerful thickener, and you can sometimes go from thin and watery to pasty and gummy if you’re too enthusiastic. So, start with a little bit. You can always add more. 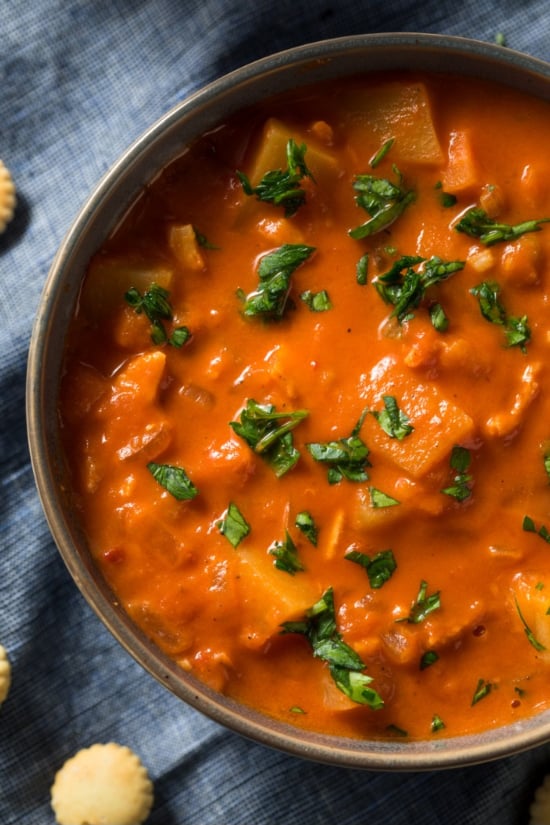 Of all the regional variations, Manhattan clam chowder is probably the one that evokes the most controversy.

White chowder adherents from Maine to Massachusetts have derided its lighter, tomato-based broth ever since it appeared on the scene in the 1930s.

These earlier varieties weren’t referred to as “Manhattan” chowders, though.)

By the 1930s, this style of chowder gained its “Manhattan” moniker. And by the end of the same decade, its fame – or infamy – had spread widely enough that a bill was introduced into the Maine legislature to outlaw tomatoes in chowder altogether.

Thankfully, though, despite the ongoing kerfuffles and the indignance of New England chowder stalwarts, the Manhattan variety has survived, and in many corners, thrived.

Those who love it revel in its balance of subtle spiciness, herby tomato acidity, and fresh clam brininess.

Variety is the spice of life. So… it’s recipe time!

We love to up our red chowder game with bacon, wine, butter, and bell pepper. But we also love to swap out celery with celery root.

We find it brings a little bit of extra savory oomph that pairs perfectly with the clams and herbs. 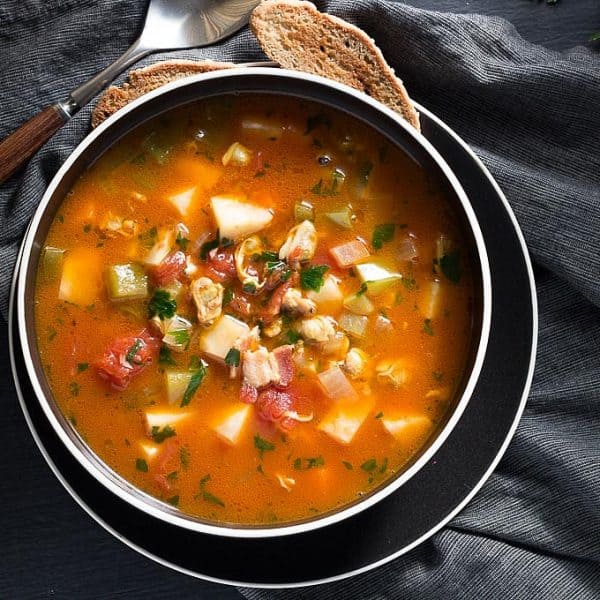 Check out this recipe from Kim at Low Carb Maven for all the Manhattan chowder deliciousness.

But it turns out we only knew your most famous variations. But, we didn’t know you’re also deeply loved with your own regional Rhode Island twist.

Known for clear broth that bring the fresh flavors of the sea to the forefront, Rhode Island chowder might be lesser known, but it deserves all the accolades we can throw at it.

But those are just words. How about a recipe or two? 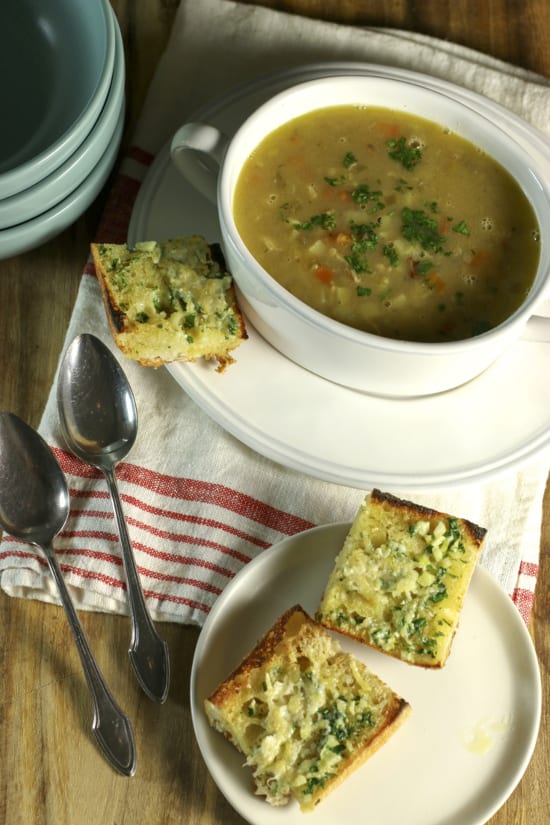 Kim and Lauren at Something New for Dinner give us the low-down on this top shelf chowdah that tastes like it’s straight off the Rhode Island coast.

Raise your hand if you like a little extra bang of salty umami in your chowder. (We know our hands are raised!)

Bacon is always a fabulous go-to in chowder, but don’t forget there are other things that long to be combined with potatoes, vegetables, and clams. Think of pancetta or salt pork with a splash of white wine. 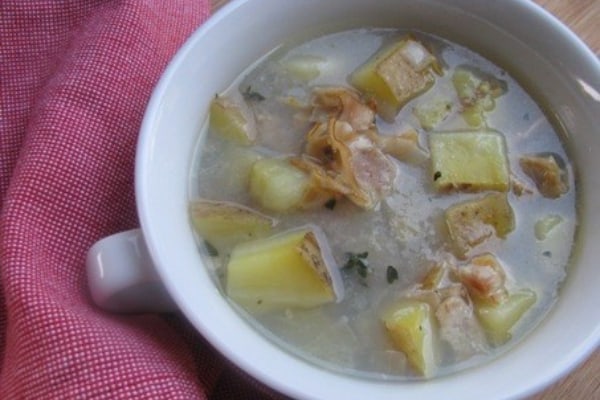 When we crave a little heat in our chowders, our thoughts drift to the sandy beaches of Florida, for a Mediterranean-influenced chowder right here in the New World.

Hello, sand in our toes and datil chili peppers in our tomato-based chowder! This Floridian variety also includes bell peppers which amps up the gorgeous color. 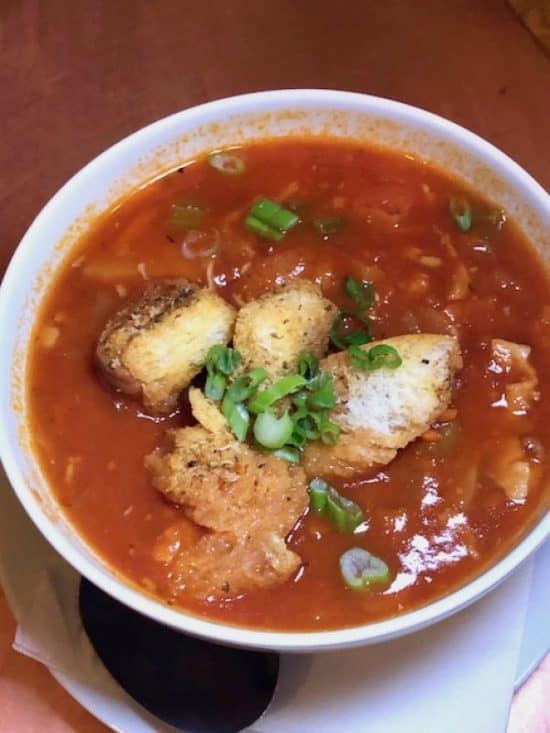 Priscilla at She’s Cooking has a little historical rundown and a great recipe.

Variations on a Theme: Excursions Into Different Clams and Different Seafoods

Some areas have their own region-defining variety of clams and the Pacific Northwest is no different.

Razor clams reign supreme here and – though they’re fantastic on their own in simple, fresh preparations – they can also make a divine chowder.

Look no further than Washington’s historic coastal Tokeland Hotel for a creamy razor-clam chowder with a hint of spice.

And if you can’t make it to the hotel, renowned chef Heather Earnhardt has been kind enough to share her delectable recipe with us. 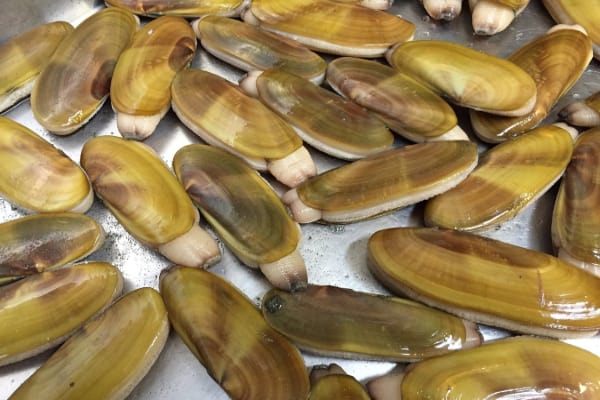 Or, if you’re in the mood for adventure and even more variety, why not ditch the clams entirely and dive headfirst into another northwest delicacy?

Your new best friend, salmon, awaits – and it makes one of the best chowders around.

The aroma is enough for us to figuratively throw on our favorite bright yellow slicker and galoshes and look for puddles to jump in. 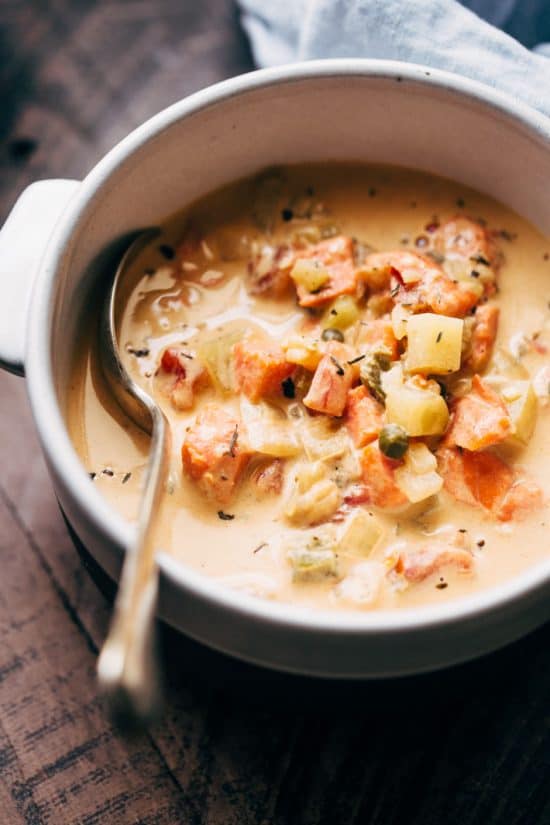 We love, love, love the heady scent of this chowder from Marzia over at Little Spice Jar.

Or, if you’re craving chowder, but also in the mood to wander even more far afield, why not skip “across the pond” and explore another thick and creamy chowder variation – Cullen Skink.

It may not have clams, but it’s loaded with those familiar textures and its flavors will knock your socks off.

And it’s stolen our hearts.

While the name “Cullen Skink” may evoke images of a prop comedian who forces people in the front row to wear ponchos, it’s actually a delightful Scottish smoked haddock chowder.

The interplay between the smoked haddock, butter, and fragrant leeks, is irresistible. Serve it up with a hearty multi-grain bread and fall in love. 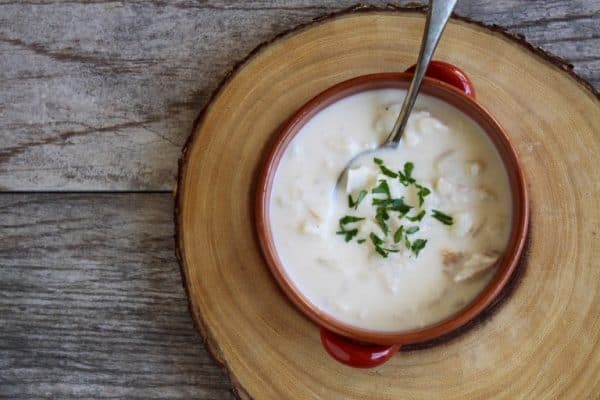 Grab the recipe from Christina at her eponymous Christina’s Cucina.

Further Improvisation for Your Clam Chowder Adventures – Lighter Than a Feather

If you’re not in the mood for heavy cream, and you’re planning on adding fresh corn to your white chowder – try to get as much corn milk into the concoction as possible.

It adds an inimitable layer of sunny flavor to the chowder, and it to the thick, creamy texture. 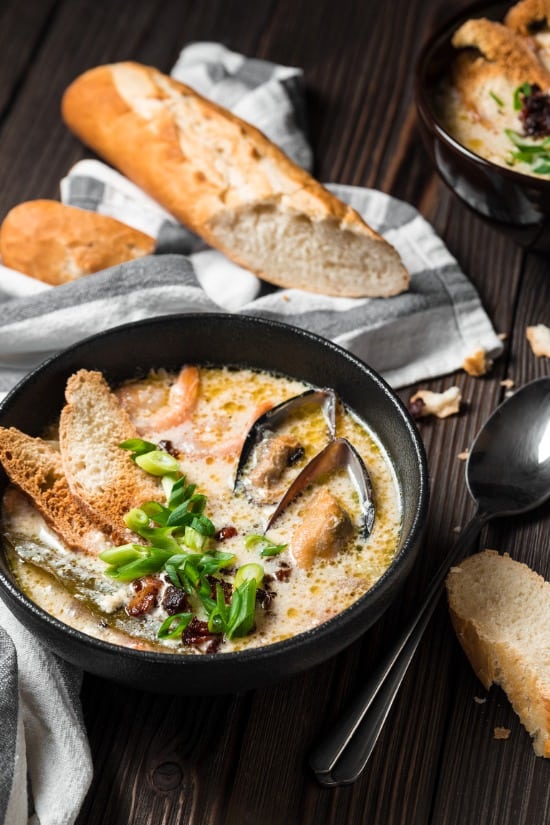 When Does a Can Actually Cut It?

If you’re either intimidated by working with fresh clams or have trouble getting your hands on the fresh stuff, maybe you’ve dabbled with canned chowder. And perhaps you were less than satisfied with the results?

So, you wonder, how to make canned clam chowder better? There’s more hope than you might think.

Canned and fresh ingredients make canned chowder better. Adding extra clams – along with their juice from a can – is the perfect add-in to the soup while it’s gently warming on the stove.

Crumbled crispy bacon is another wonderful way to bring the canned variety to life.

And don’t forget the fresh herbs! You want to add loads of them to the bowl.

Fresh herbs brighten everything in the bowl, so don’t be shy with the parsley, thyme, and rosemary.

How Long is Clam Chowder Good For?

Clam chowder is good for three to four days in the refrigerator. Simply let it cool, and store it in air-tight containers. Bonus, you can freeze it – with one caveat.

If you want to have clam chowder in the freezer for a quick meal on a cold winter’s night, just make the chowder the way that you normally would – but simply omit the cream.

When you want to make the soup, defrost it, cook it, and add cream at the end.

Voila! You have homemade creamy clam chowder straight from the freezer. 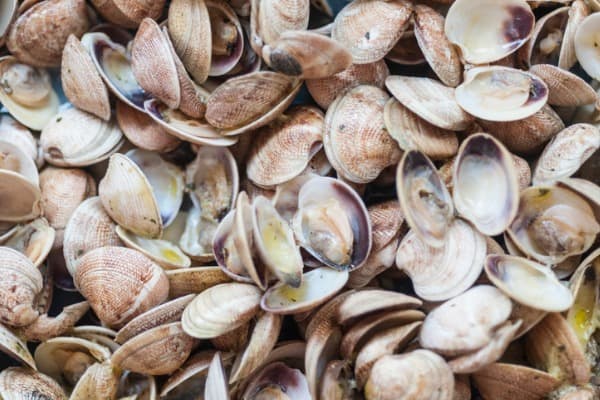