Imitation lobster is an affordable alternative to real lobster.

It’s delicious and tastes just like the real thing!

In fact, imitation lobster is made from real lobster meat and Japanese seafood, which is called Surimi.

Surimi is now a part of many cuisines, and there are tons of easy recipes that you can make with this delicious mock lobster.

The best thing about Surimi is that it’s fully cooked.

It just needs to be heated!

Lobster salad is one of the easiest recipes you can make.

Additionally, the imitation lobster meat adds so much unique flavor to the salad.

This recipe is healthy and flavorful. Also, it can go well with any meal.

You can make big patches of this tasty salad that last for days.

The imitation lobster will stay fresh in your fridge for up to three days.

Here’s a list of the ingredients you’ll need to make a delicious imitation lobster salad: 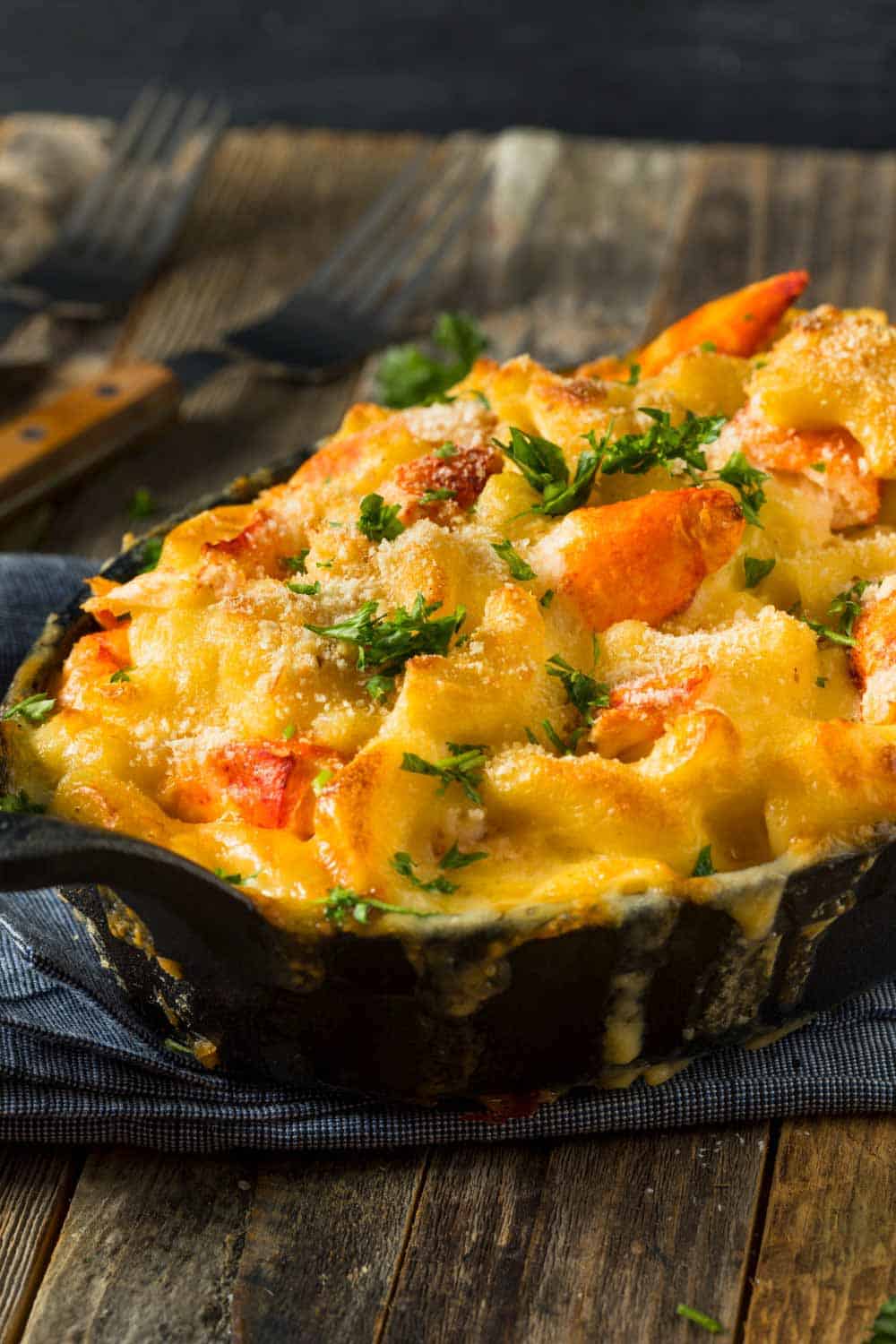 This recipe is a personal favorite of mine.

The mixture of creamy cheese, imitation lobster, and macaroni is out of this world.

Although we’re making the mac and cheese from scratch, anyone with basic cooking skills can tackle the recipe with no problem.

The imitation lobster adds a needed kick to the traditional mac and cheese.

So, if you need a change from the basic meal, just add some imitation lobster to it!

For this recipe, you can adjust the cheese mixture according to your liking.

You can use Gouda, Parmesan, Cream Cheese, or any cheese you love.

I highly recommend trying the Cheddar, Romano, and Gruyère mixture.

It’s very rich and goes well with the imitation lobster.

Here’s a list of the ingredients you’ll need to make this cheesy heaven:

Lobster rolls are a traditional dish in New England.

Unfortunately, you’ll have to pay a lot of money to eat a lobster roll the size of a hot dog bun.

Lucky for you, we have one of the best budget-friendly fake lobster recipes, the imitation lobster rolls!

Though this recipe is incredibly easy and affordable, it tastes amazing.

Here’s a list of ingredients you’ll need to make a mouthwatering lobster rolls:

The lobster rolls recipe is as easy as it gets.

Here are the steps that you need to follow to make the lobster rolls:

Alfredo pasta is a popular Italian dish. The Alfredo sauce is creamy, cheesy, and buttery.

Typically, the Alfredo pasta is made with chicken pieces.

However, you’d be surprised at how good it tastes with imitation lobster instead of poultry.

The lobster adds so much depth to the sauce; all the flavors will be melting in your mouth!

You can replace the milk in this recipe with heavy cream for a more dense and creamy flavor.

Are you a risotto lover?

This imitation lobster risotto is a must-try!

The recipe is made using crab, but you can simply replace it with mock lobster.

The mixture of veggies, rice, and crab is like no other.

I could eat this meal pretty much every day and not get bored. 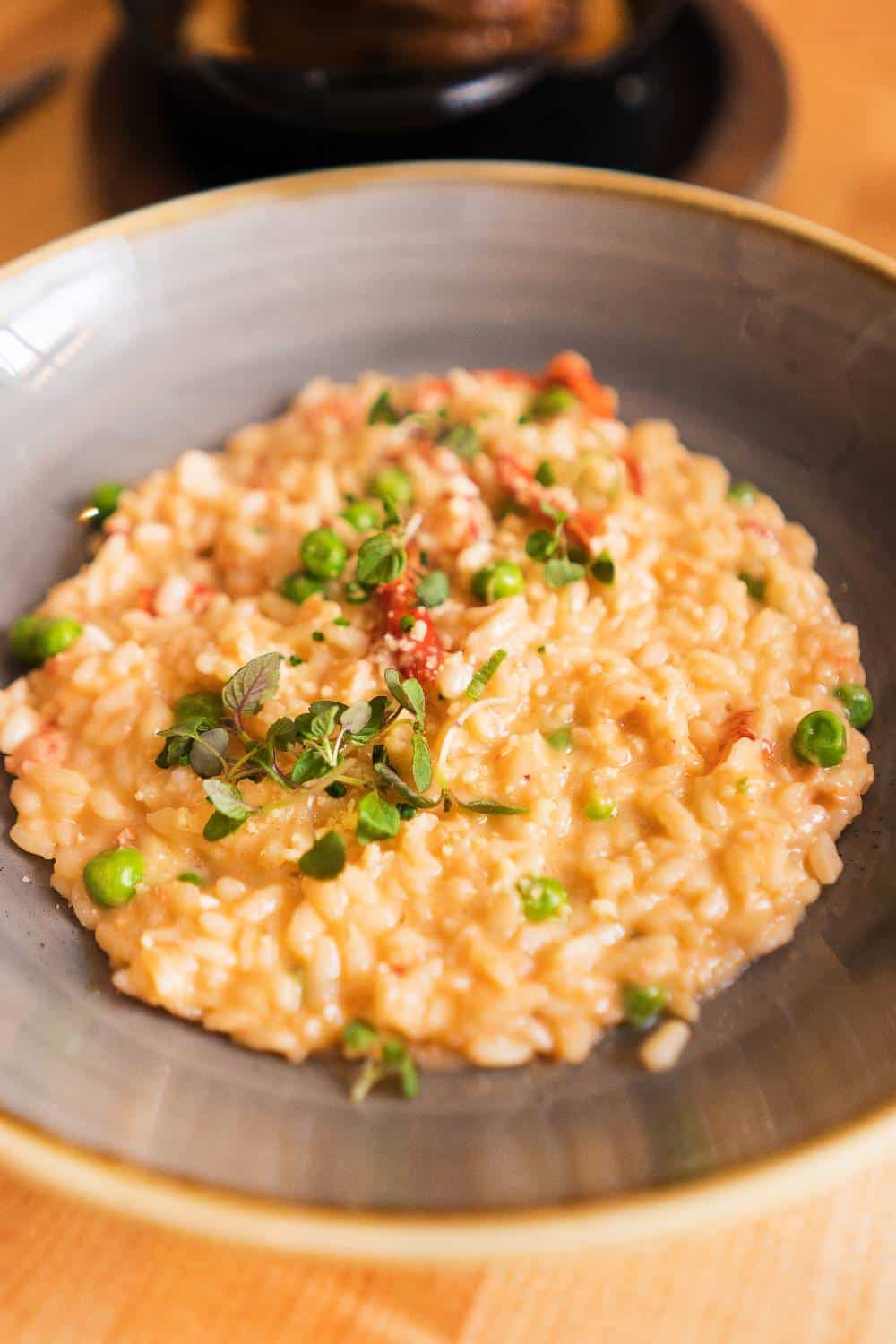 Here are all the ingredients you’ll need to make a tasty lobster risotto:

You can proceed with the following steps to make the lobster risotto:

Inspired by the famous Mexican dish, the coctel de camarones, this Mexican imitation crab cocktail is an appetizer that will surely get your mouth watering.

The imitation crab cocktail is packed with tons of flavors.

With a spicy tomato sauce and limes, this recipe can indulge your palate, and it’s a great appetizer for any meal or even as a light dish.

Yeah, shrimps are great, but crab takes this recipe to a whole other level!

Grab some nachos, and enjoy the delight of the Mexican lobster cocktail.

This recipe is for seafood lovers. We’re going all in with imitation lobster, imitation crab, and shrimp!

All the delicious seafood is mixed well with mayonnaise and cheese, which complements the taste of the seafood.

Here’s the best thing about this dish:

It’s super easy to make, and the ingredients are very simple!

Yet, this recipe is incredibly delicious.

It’s a must-try for any seafood lover.

With the imitation lobster, every bite of the cake tastes like seafood heaven (especially with your favorite sauce!).

The cakes are crispy from the outside, but once you bite in, the insides will just melt in your mouth.

This recipe is intended to be an appetizer, but it’s so good that you can eat it as a standalone meal with some delicious sides.

The French Quiché is a savory, creamy dish with a crust layer at the bottom.

What more could you ask for?

The delicious dish might be a little tricky to prepare, but it’s totally worth the effort.

More importantly, the imitation lobster goes really well with the rest of the ingredients.

The imitation lobster Quiché is so delicious that you probably will want to keep the leftovers for the next day’s breakfast.

This Mexican seafood enchilada is a unique dish that you’ll surely enjoy.

The buttery mixture of the lobster, along with cheese, sour cream, and enchilada sauce, is out of this world.

Surprisingly, this seafood enchiladas recipe takes only around 15 minutes to prepare.

Make sure to eat it while it’s still hot!

This is, by far, the easiest recipe on our list. It simply doesn’t get easier than this.

You can eat it as a main dish or as a side dish.

The sautéed imitation crab is a simple recipe.

You can swap the crabs with imitation lobster, or you can use a mixture of both.

This dish can be ready in a matter of minutes.

If you want to enjoy the taste of imitation crabs with minimal additions, this recipe is for you.

It’s no secret that lobster goes well with cream cheese, but combining it with a layer of baked goods is even better!

If you appreciate savory bakeries, this one is a must-try.

More importantly, this recipe is yummy and easy to prepare!

It’s a perfect snake for game day, and kids love it.

The lobster sticks can be ready in no time.

You’ll just need to dredge the imitation lobster in the flour first, and then the eggs and the breadcrumbs.

Then, place them in your air fryer. Et voilà!

Pair them with your favorite dipping sauce, and you’ve got yourself a delicious snack.

This amazing recipe is kids-approved, and it’ll find its way into your children’s lunchbox.

Winter is coming, and what better way to face the cold weather than with a hot lobster bisque!

The lobster bisque is thick, creamy, and flavorful!

Although it takes some time to cook this recipe, it’s worth it!

Additionally, you can freeze the lobster bisque and reheat it whenever you want.

It can stay for up to three months in the freezer. 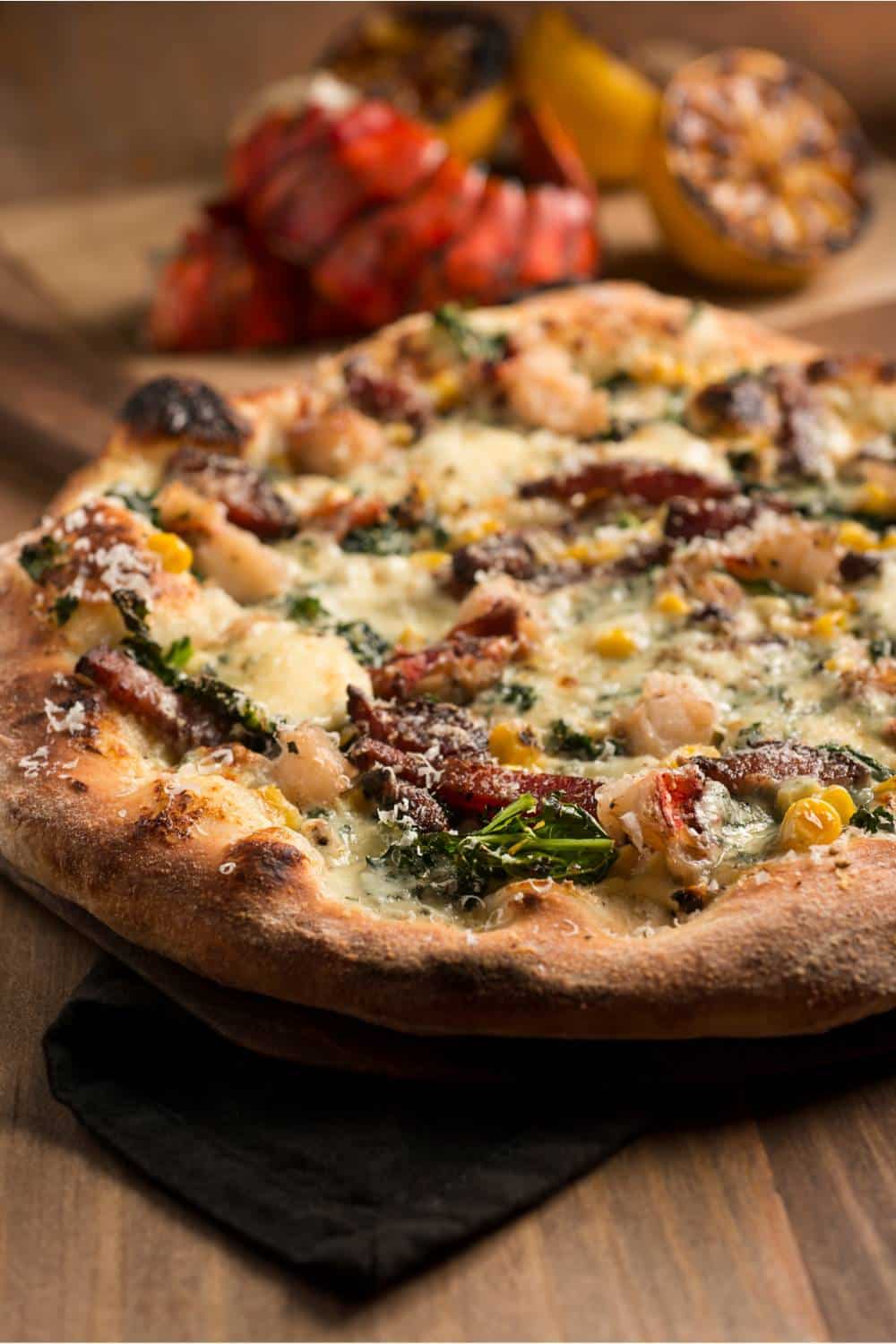 Saving the best for last, lobster pizza might seem like a weird idea for some people, but they’re missing out on so much!

The imitation lobster is a perfect topping for a light, crusty pizza.

I prefer it with a garlic lemon sauce and Parmesan cheese.

I like to add a generous amount of lobster as well.

You want to have some lobster on each bite you take.

You don’t have to spend a fortune to enjoy a lobster dish! Imitation lobster tastes just as good, and it’s full of nutrients.

There are tons of imitation lobster meat recipes out there. We’ve picked the best ones for you, so we hope you enjoy them. 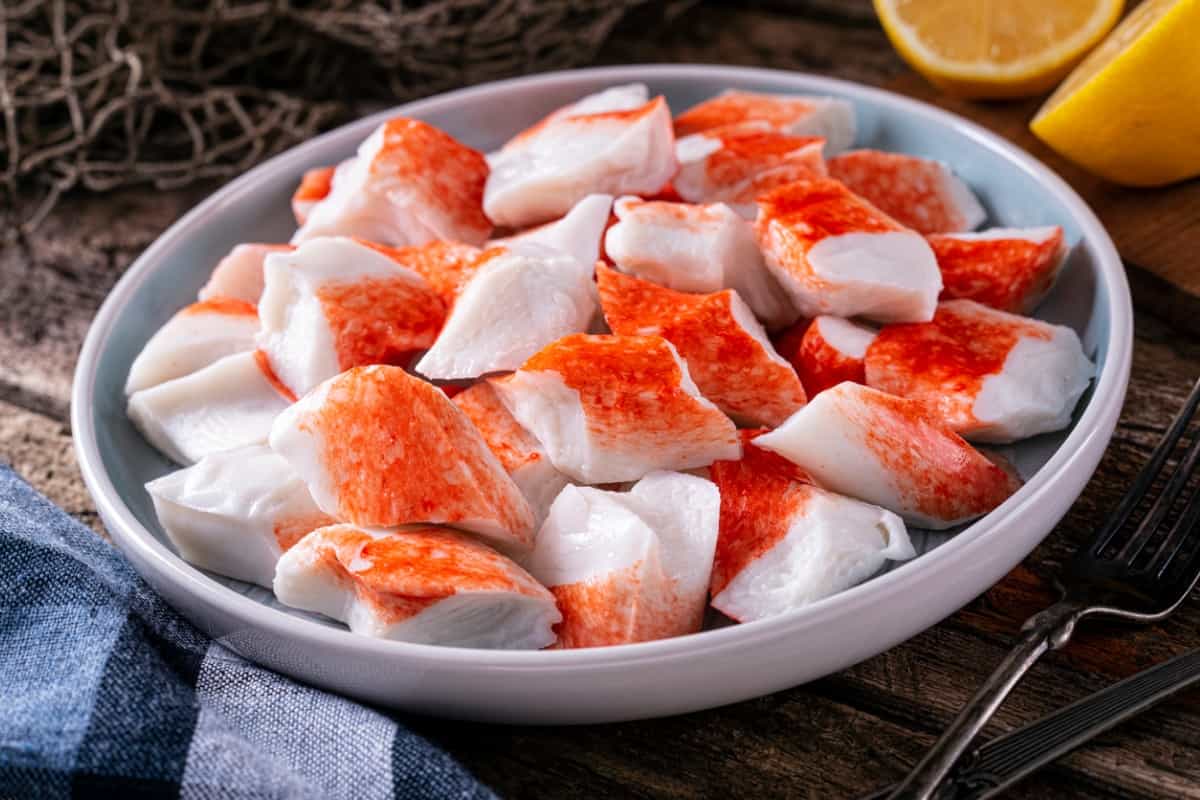 15 Imitation Lobster Recipes to Dine on

Ideas and recipes to cook with imitation lobster