Who says you can’t go vegan and when you go for a panini?

Well, good news: Most breads out there are vegan (says PETA) but just in case, you should check the ingredients.

Some breads will include eggs, milk, butter, whey, cream, casein, honey, and other animal-derived ingredients.

So, before you start putting your vegan panini ideas together, make sure you start with a bread that suits your needs.

Once you’ve gotten that ready, then you can begin making the best vegan panini recipes around using the gems below!

These recipes are so tasty that even your meat-eating friends will be amazed how delicious and filling they all are.

Now that you’ve got your favorite vegan bread ready, check out these renditions your mouth is going to love!

Avocado has to be one of the best ingredients for this style of hot sandwich.

It’s creamy and dreamy, and it doesn’t hurt that it’s so good for you.

Shallots, portobello mushrooms, cherry tomatoes, and kale round out the rest.

You’ll use olive oil instead of butter and either omit the cheese or use your vegan one to finish off this extraordinary rendition.

This idea was inspired by the vegetarian version created by Lindsay at Pinch of Yum.

Now here’s a unforgettable idea for you…

It starts with marinated tofu.

Then it is layered up with avocado and sauteed veggies like mushrooms, onions, and spinach.

Once it’s grilled together, it almost looks too pretty to eat.

But it’s truly a goner because once you have a bite, you won’t stop.

The full recipe is from Catherine at Plant Based RD. 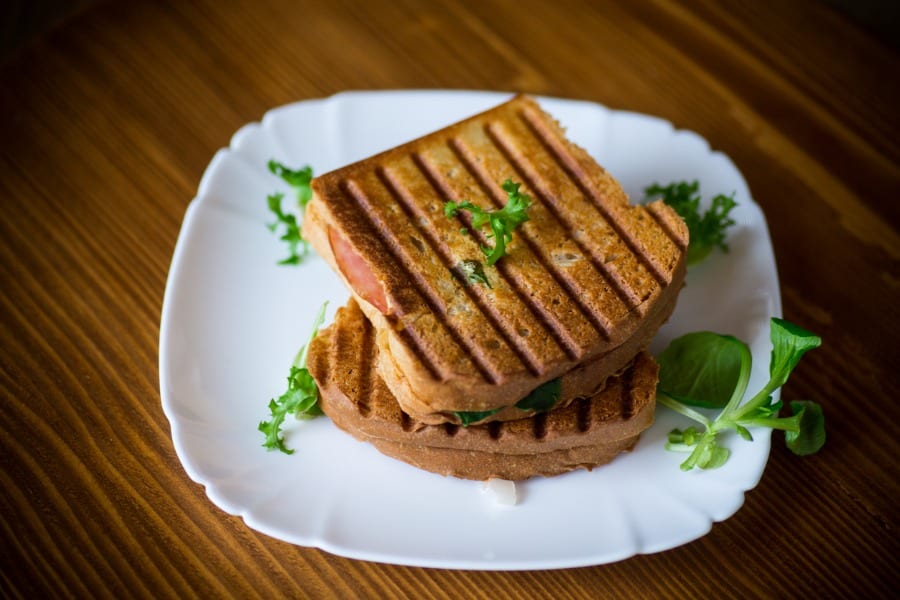 Time to bring those easy, breezy Mediterranean flavors home to your panini press!

Grab your bread layers and spread it with black olive tapenade.

Then roast your red peppers, eggplant, and zucchini.

Place them on your bread with a handful of rocket and basil.

Season with a little salt and pepper, and savor the coastal roasted tastes of these beautiful veggies!

Pizza needs a few tweaks to be vegan-friendly.

And when you make those tweaks and put them into your vegan bread and into a panini press, the magic begins.

You can use vegan Italian sausages if you like for a more robust pizza panini.

Or you can keep it simple with Chao’s creamy original cheese.

And of course, some pizza sauce.

You won’t miss not having meat with this, but if you’ve missed pizza, you’ve got to make this now.

For full details, head to The Conscientious Eater.

Some people say vegan, or vegetarian paninis like these, have no flavor.

To that, we counter with this gorgeous delight, made with fresh tomato slices, roasted red peppers, baby spinach, and fresh basil.

You can add in harissa, onions, a squeeze of lemon, and other stuff too.

You’ll adore the recipe from Healthy Happy Life, that’s for sure!

Now here’s a twist for you…instead of using bread, use portobello mushrooms as the bread!

With seedless cucumber, black olives, onion, and red and green bell peppers, this veggie filling tastes amazing with a bit of vinaigrette dressing.

Press it together with the mushrooms as the bread instead and be prepared to fall in love with this no-carb vegan panini!

The original recipe can be found at Seduction in the Kitchen. 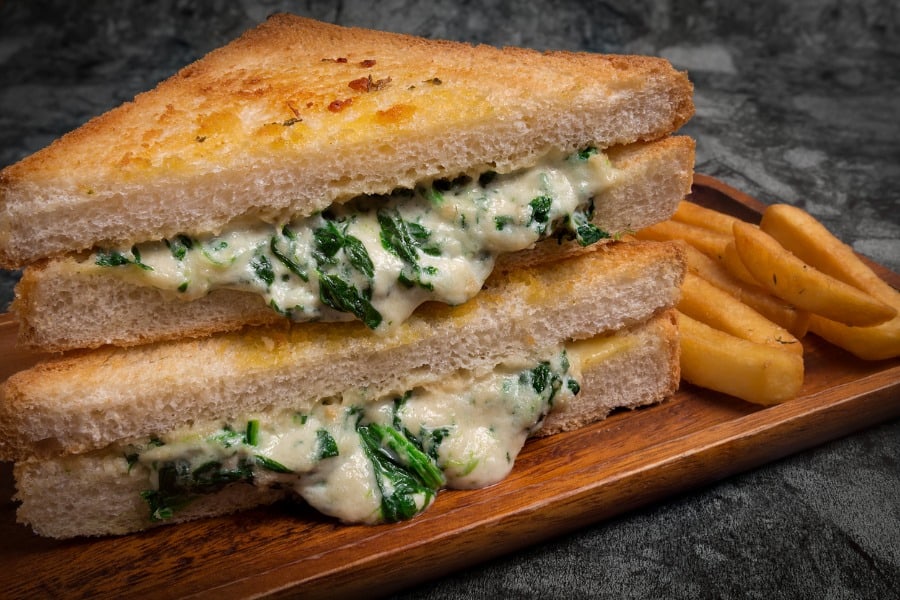 Next up on our unique list, you’ve got to make a spinach artichoke panini.

Using vegan mayo, vegan butter, and vegan mozzarella, you can recreate the creamy and rich tastes that the original spinach artichoke dip offers.

Of course, you need spinach, minced garlic, and artichoke hearts too.

Put it all together and press for a memorable panini you’d swear was made with regular ingredients if you didn’t make it yourself!

This sandwich and dip combo is truly amazing, that’s all I can say.

This protein-rich hot-pressed sandwich recipe gives you loads of flavor.

And you’ll need that wonderful vegan butter to bring it all home.

Such a simple idea, yet you’ll be a huge fan of this delicious, one-of-kind recipe!

The full recipe can be found at One Green Planet.

Red pepper, zucchini, and onions come together to fill up this sandwich, with a tangy balsamic taste.

But the secret is in the sun-dried tomato hummus.

Which you should make yourself.

If you don’t you can always buy some that way.

But it will taste best if you make it from scratch.

Plus, if you’re not a huge fan of vegan cheeses, you won’t need any.

The hummus does a stellar job of making things creamy and delightful without any type of non-dairy or dairy items.

See how it’s done at Oh My Veggies.

This special panini recipe might just be our new favorite.

Inspired by the dishes we love during the holidays, it takes roasted sweet potatoes, seared brussels sprouts, and cranberry relish and lovingly tucks them in between garlic-herb slathered bread.

Take your tastebuds south of the border for a bold and zesty lunch.

Add some sambal sauce along with spinach leaves and put this miracle together.

Maybe those are fighting words, but hey, give it a try!

Sliced marinated tofu takes on the taste of steak.

And with a homemade horseradish aioli using vegan ingredients, you may forget you’re eating vegan food.

This recipe is so savory and delish, it’s going to be a regular in your rotation, guaranteed.

That horseradish sauce will have you craving it at regular intervals.

See how it’s done at Rabbit and Wolves.

With savory mushrooms melded together with sweet caramelized onions, it hits all the right notes.

Of course, using vegan mayo with sun-dried tomatoes thrown in just rounds out that flavor spectrum.

It’s one of the most satisfying vegan paninis you’ll ever try!

Serious Eats has a recipe you can follow if you need it.

Just look at it!

All those gorgeous colors mean all kinds of healthy, nourishing things for your body.

And for your mouth, it means more flavors.

With sweet potatoes, vegan cheddar, vegan mayo, red onions, and greens, this rainbow-colored panini for vegans is a true delight.

Ilene at The Colorful Kitchen has the whole recipe on how to make this incredible masterpiece.

And finally, we’ve got a hot sandwich recipe for the gods.

Ok, it’s for everyone to feel superb to everyone else.

Just make it and you’ll find yourself feeling like you’re on top of the world.

It looks perfect for parties too so if you need a vegan option, this will please even the meat-eaters out there.

The creamy filling is full of flavor and nutrition, making it a win for any occasion.

As far as vegan panini recipes go, these are the best out there in my humble opinion.

Whether you’ve been vegan for years or are just starting to go meatless, or even if you’re only going meatless on occasion, you’ll find these tasty recipes will help you be more creative with vegan ingredients in your kitchen.

And who knows…you might not even miss meat once you start preparing healthy paninis like any of the above!

Ideas and recipes for vegan paninis