Turkey panini recipes are good to have under your hat.

Not just because you’ll need an ace up your sleeve to make Thanksgiving leftovers disappear.

But a turkey panini is also ideal for when you’ve got turkey lunch meat.

Turkey is great, but if you have it the same way every day, it gets boring.

So boring that you may never want to see turkey again.

These recipes cover all kinds of possibilities to ponder with turkey by stuffing them into paninis.

Turkey avocado panini, turkey bacon panini, turkey and cheese…and yes, some unusual suggestions that you’ll be so happy you took a chance on because they’re about to be your favorite way to eat turkey!

We’re talking turkey with recipes for panini-pressed turkey sandwiches everyone is going to love no matter the time of year. Use your leftover turkey from holidays or deli-sliced turkey to make these perfect paninis! 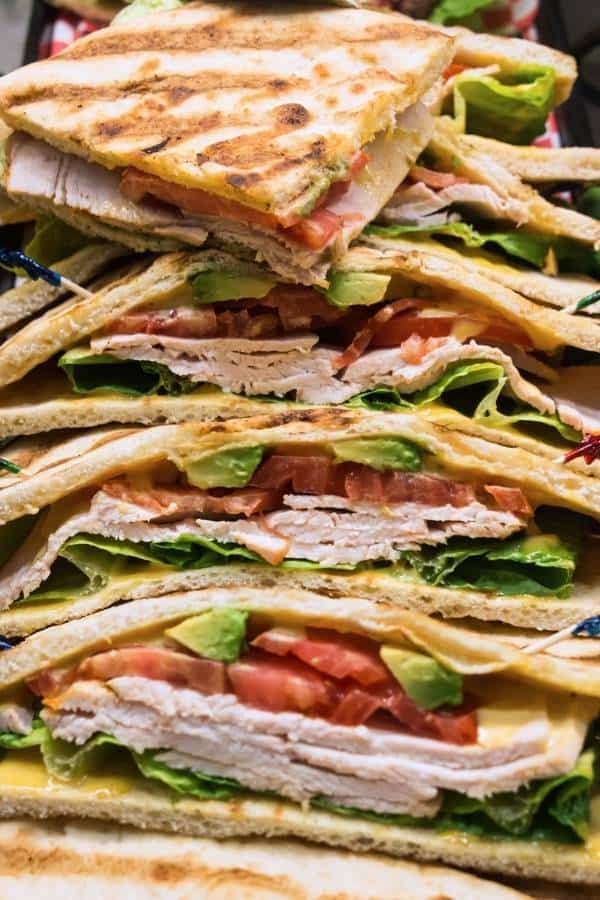 Put your favorite cheese on there too. And some tomatoes.

Spinach and red onions also add a little something to make this a super healthy panini recipe.

You can put mayo or Dijon on your panini bread and make the best turkey avocado panini there is!

What do you get when you combine sliced turkey with crispy bacon, cranberry sauce, and cheese?

You get a turkey bacon panini you’ll want to eat every day.

Heck, that bacon lured us in.

But the contrast between the cranberry and the cheese is what will keep you coming back for more.

Bite for bite until it vanishes away, we won’t tell if you go back into the kitchen to make a second helping.

This exquisite recipe comes from Byron at Lord Byron’s Kitchen. 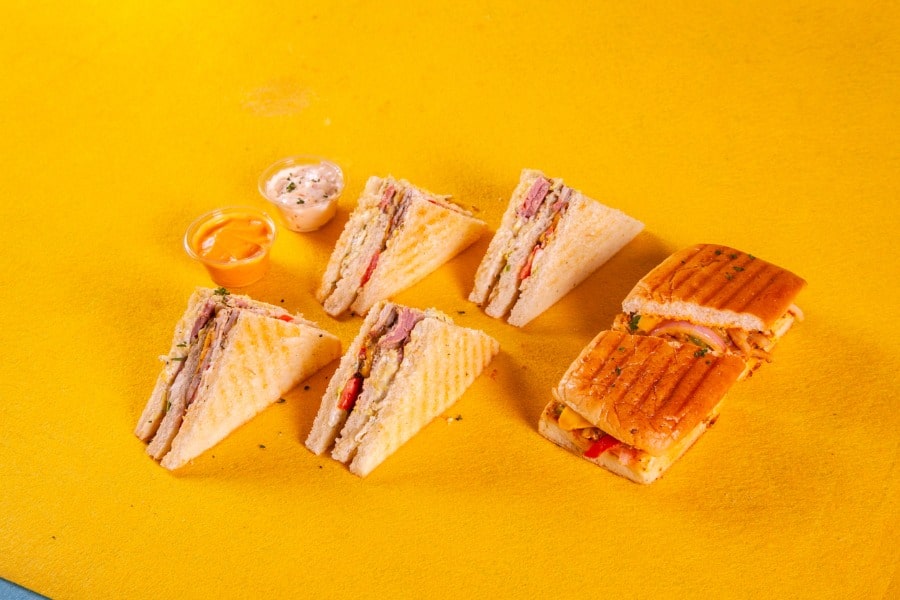 Get your bread ready smear on the mayo.

Then stack that deli turkey along with cooked crispy bacon.

Tomatoes and Swiss cheese are the final additions.

Use butter on the exterior to get that golden hue and rich taste, and your turkey club panini is complete!

What’s in a turkey melt panini?

It’s like something heavenly you order at your local corner café.

Instead of paying $12 for it though, you can make it cheaper.

Tomatoes add more to this turkey melt, but the real winner in this recipe is the red wine vinegar mayo. 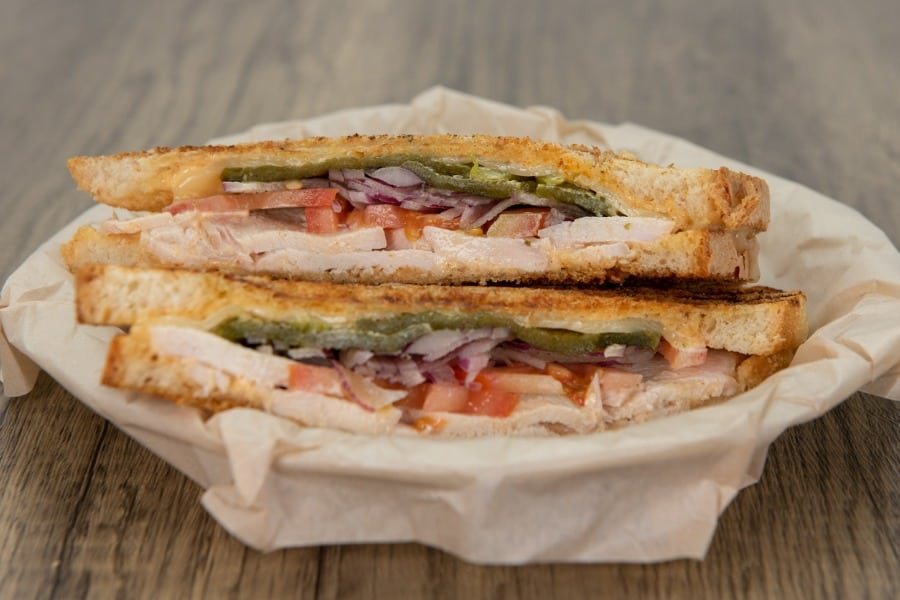 How do you make a turkey and cheese panini?

Let us count the ways!

One – turkey, basil, provolone, and tomatoes.

We think you get the idea.

Even throwing pickles into the mix would make any turkey and cheese panini pop!

Whether it’s right after Thanksgiving or Christmas, or you froze your leftovers, you can make this loaded turkey panini.

The secret to the best taste is pairing that turkey with sage, cranberry sauce, cooked bacon, goat cheese, and muenster cheese.

Your mouth is watering isn’t it? 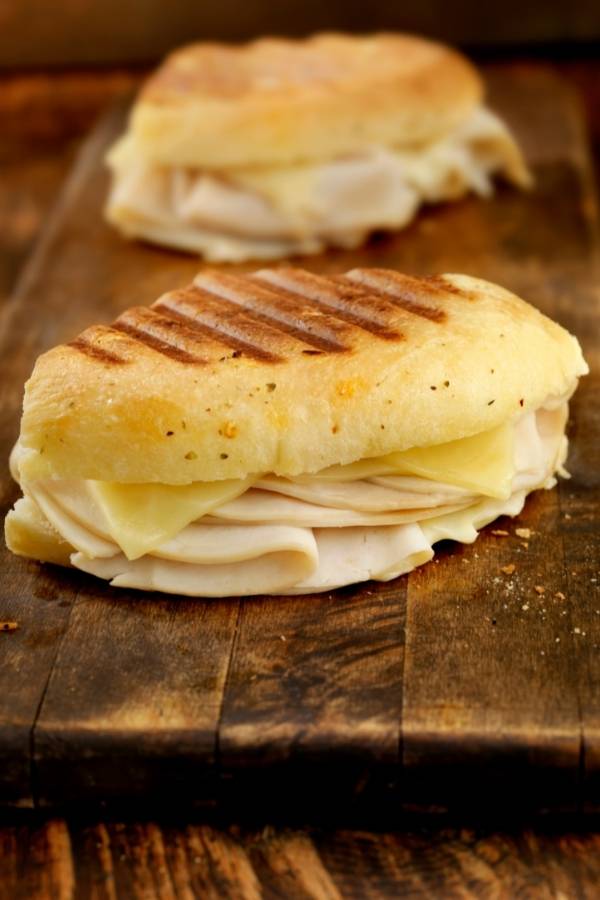 In our other panini posts, we had a chicken and apple panini.

Well, now you can do the same with turkey.

But the secret in this one is using apple butter AND a thinly-sliced apple.

When you press this turkey and apple panini together, it’s just one of the most amazing tastes.

The apples really complement the turkey, much like cranberry does.

If you’re making this at any old time of year and don’t have those Thanksgiving leftovers, you will love this apple and turkey combo!

Kick up the flavor with this turkey sandwich and you won’t be sorry!

This spicy southwest version is a fun one.

You’ll make an avocado mash with cilantro and lime juice.

And the secret ingredient? 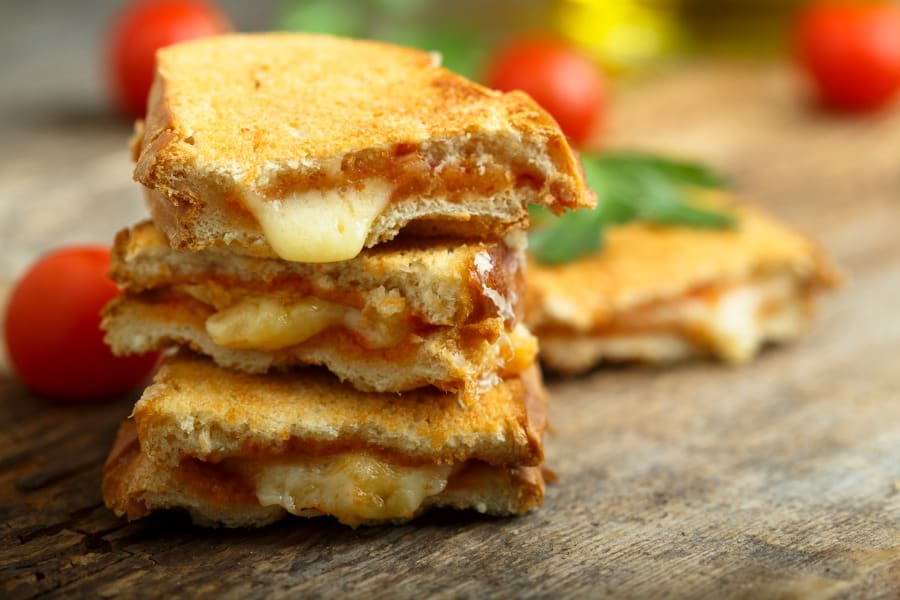 There’s really nothing to making this one.

Or go with a hint of spice with pepper jack.

Have fun with it.

You can pop in some spinach for more greens too.

And that’s how you make a barbecued turkey and cheese panini to press for lunch perfection!

And all 3 of these things go beautifully together.

It’s the ultimate trio to put in any sandwich, honestly.

That creamy guacamole and Havarti cheese just make it so dreamy.

With the juicy turkey and crispy bacon, you’re going to want to eat this every chance you get! 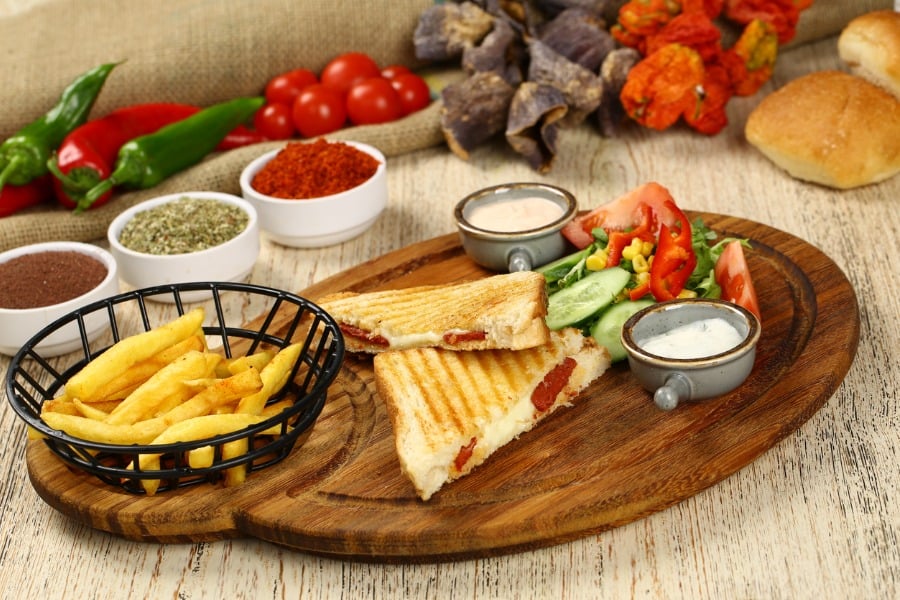 Here’s another scrumptious sandwich idea for you…

Throw in some arugula for some color.

You’ve got a turkey and arugula panini!

This is going to sound a little weird, but come along for the adventure.

It’s got it going on.

Put it on ciabatta rolls and press it.

If you don’t have apple butter but love the idea of apples and turkey from the earlier suggestions, this apple, cheddar, and turkey dream combination has you covered.

The difference here is with tart green apples and sharp cheddar.

A little Dijon goes great as well for a turkey panini recipe that contrasts with bold textures and flavors that pair surprisingly well together.

Get the recipe from The Novice Chef. 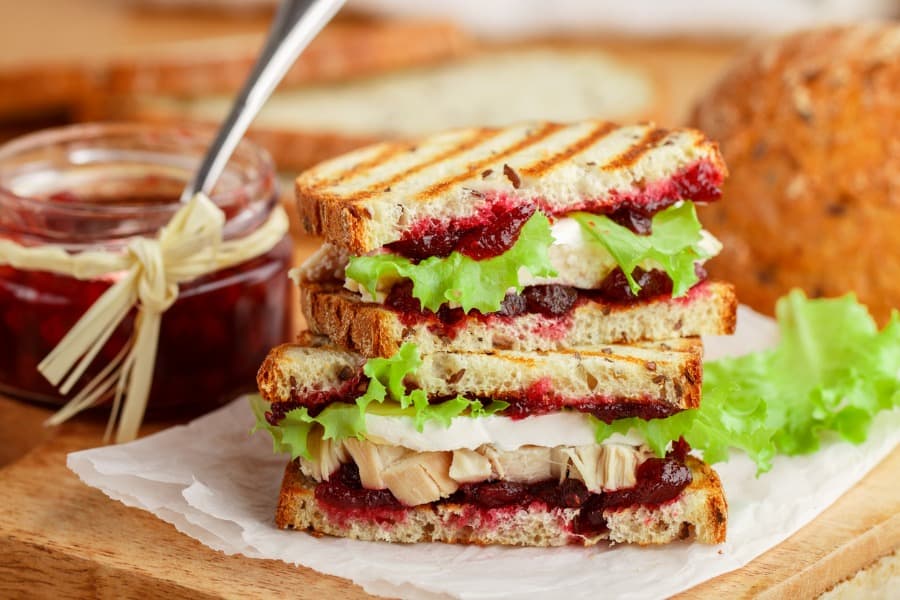 It doesn’t have to be even close to Thanksgiving to get that winning turkey and cranberry combo.

In fact, it could be the middle of summer.

And if you’re missing the tastes that bring your loved ones around the holiday table, this tasty turkey recipe is sure to bring that comfort you need.

Adding some sauteed onion to your cranberry sauce on the stovetop gives it a savory addition.

You’ll also want to add in some cream cheese and grated cheddar.

It’s so simple, but simply, quite good.

When you put it in your panini press, you’ll be that much closer to a holiday hug for your tummy!

15. South of the Border Turkey Panini

Turkey flies south for the winter.

At least it does in this exquisite recipe that can really perk up your lack of enthusiasm for leftovers.

Your sliced turkey or even leftover smoked turkey breast from the holidays can whisk you away to another part of the world.

You can make your guac yourself or grab some from the store.

Something else to boost that spice?

Give it some jalapeno slices.

The recipe from Cookstr totally inspired us and it is sure to inspire you too!

Sun-dried tomatoes have a special, tart-like taste that makes them more fun than using regular tomatoes.

Those go on this panini too.

Using the sun-dried tomato pesto is what is going to make this pressed sandwich of turkey go from good to AMAZING.

So, slather it onto your panini bread of choice – a nice French bread loaf will do.

Then add thinly-sliced turkey from the deli.

Of course you do!

Make it mozzarella, then add sliced red onions and your regular tomato slices too.

What happens in the panini press?

Why, this magical turkey sandwich creation gets its wings, and you will too as you float away into food heaven with every bite.

For this last creation of gobble-gobble goodness, we have a confession to make.

But then this recipe jumped out at us.

Honestly, we were sold on the sweet cranberry mustard and creamy brie.

We see you salivating over there!

The cranberry mustard is a whole new level of gourmet.

And who could say no to brie?

In fact, we’d have been foolish not to have at least one recipe with turkey pressed sammies on here with brie, wouldn’t we?

So, pop by for Whole and Heavenly Oven’s recipe with the details on how to make that cranberry mustard stuff that you will now find any excuse to make.

These recipes are all simple to make – you can even swap out your poultry and make these into some tasty chicken panini sandwiches.

And, even if you’re just starting out fumbling around in your kitchen, you’ll soon be making paninis that will put even the professionals to shame!

See what happens when you talk turkey with us? You get these amazing turkey panini recipes that will take you out of your meal doldrums and put you on a whole new level of dining delight. 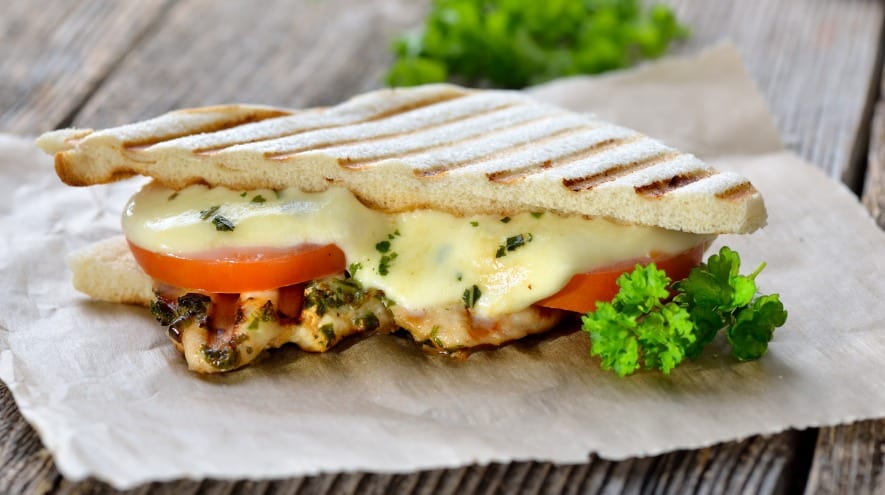 Ideas and recipes for turkey paninis