Packed with aromatic spices and flavorful ingredients, Mexican soups and stews are some of the best the world has to offer.

They’re not only hearty but also super easy to make.

They’re nutritious, too, as they feature protein-rich ingredients like chicken, beans, potatoes, avocado, and more.

In this article, I’ve compiled some of the tastiest Mexican soup recipes I’ve ever tried—and trust me, I’ve tried a lot!

These recipes will make you reach for a second (and third, and fourth…) bowl. Not to mention, everyone else in your family too.

Get your knives and bellies ready, for we’re making Mexican soups for the soul!

Packed with just the right amount of heat, this Mexican soup recipe is super easy to make.

Aside from the pinto beans, it only has three other main ingredients: tomatoes, carrots, and potatoes.

If you’re not a big fan of pinto beans, you can substitute them with black beans, navy beans, or cannellini beans.

To make it a bit more “fancy,” top it up with traditional Mexican salsa, avocado, or sour cream before serving.

Whenever I visit Mexico during the winter, I always crave a bowl of Albondigas Soup.

If I don’t have it at least once, my trip would’ve been in vain!

Albondigas Soup is the Mexican version of meatball soup.

This recipe is made with ground beef and rice meatballs and vegetables, and served in a light but flavorful broth.

This soup is insanely filling on its own, but if you really want to take it to the next level, serve it up with a side salad, crusty bread, or warm tortillas.

Regardless of where it’s served, you can never go wrong with lentil soup.

It’s a staple food throughout most of Latin America, Europe, and the Middle East—for good reason.

Made with green lentils, Ortega chilis, onion, garlic, and an array of vegetables, this Sopa de Lentejas is nutritious, well-balanced, and super delicious.

This soup is a wonderful first-time recipe for your little boy or girl to make. It doesn’t take any effort to make.

You don’t even have to soak the lentils; simply rinse them, pick through any debris you may find, and add them straight to the pot to cook with the other ingredients. 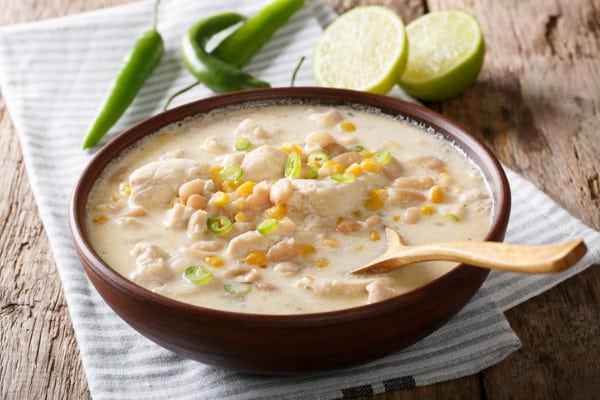 This White Chili Chicken Soup is deliciously creamy with just the right amount of spice.

It takes absolutely no effort to make; simply toss the ingredients in a slow cooker and cook on low for 5 to 8 hours.

Put all the ingredients in the slow cooker and season it with salt, pepper, oregano, cumin, chili powder, and cayenne pepper.

Let it cook on low for 8 hours or on high for 3 hours. Then, add some cream cheese and half and half, stir, and cook on high for an extra 15 minutes.

Mexican Noodle Soup, locally known as Sopa de Fideo, is not only budget-friendly but also extremely easy to make.

It’s made with five plant-based ingredients and takes less than 25 minutes to cook.

Although angel hair pasta is recommended in this recipe, regular whole wheat spaghetti, broken into one-inch pieces, will do just as well.

Serve it up with a wedge of lemon and top it up with some cilantro. Yum!

If you have some leftover meat or chicken, this is the recipe for you.

Posole, or pozole, is a traditional Mexican meal made from meat, shredded cabbage, chili peppers, avocado, and hominy. 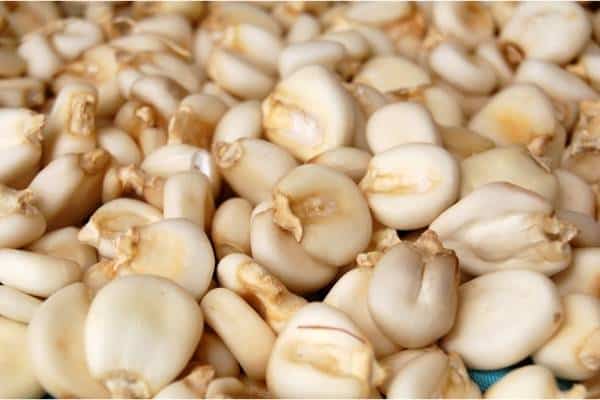 For those who aren’t familiar, hominy is whole dried maize kernels that have been nixtamalized or treated with an alkali.

It’s frequently used in tortillas, pupusas, arepas, and a number of other Latin and Central American cuisines.

To make posole, sauté a large onion in a soup pot until tender and transparent. Then, add about two tablespoons of flour and brown for another two minutes.

Add the shredded meat and hominy and let it cook for another 10 minutes. That’s it. Doesn’t that sound delicious?

Looking for a low-carb, gluten-free soup that’s also keto-friendly? I have just the right recipe for you: creamy Green Enchiladas Chicken Soup!

It’s the perfect one-pot Mexican dish for busy weeknights and weekends where you just want to sleep all day.

Simply throw all the ingredients in your pressure cooker, slow cooker, or stovetop and let it cook on low for six to eight hours.

It takes a while, yes, but trust me: it’s absolutely worth the wait.

Plus, those eight hours will just fly by when you’re doing house chores or catching up to your favorite telenovela!

Traditional tomato soup is nice and all, but nothing beats the taste of Mexican Tomato Soup.

Out of all the Mexican Tomato Soup recipes I’ve tried, I loved Jamie Oliver’s version the most. It’s bursting with so much flavor it’s insane.

The key ingredients of this recipe (other than tomatoes, of course) are roasted red peppers, lime, and garlic.

To add a bit of creaminess to the dish, top it up with a yogurt dressing made of fat-free yogurt, mint, and jalapeños.

Caldo de Pollo is one of my favorite Mexican soups. It’s healthy and flavorful, made with chicken, vegetables, and homemade broth.

Unlike most chicken soup recipes, Caldo de Pollo uses whole chicken pieces rather than chopped or shredded chicken. This adds more flavor to the broth.

Regional Mexican cooks use cilantro or flat parsley in Caldo de Pollo, but homemakers prefer culantro because it has a similar but stronger flavor. 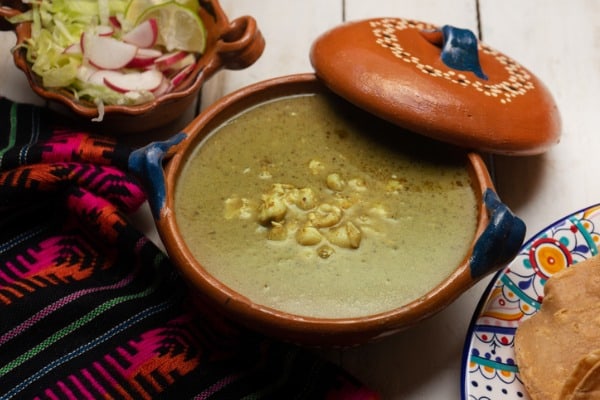 To make this soup, blend tomatillos, poblano chilis, jalapeno, onion, and garlic with a cup of water.

Then, cook the mixture over medium-low heat and add in some shredded chicken and broth.

Let it stew for about 10 more minute and enjoy.

With just a few ingredients, some of which include heavy cream, corn, and vegetable broth, you can whip up this creamy Mexican corn soup in no time.

If you really want to make the flavors of this corn soup pop, I recommend using fresh corn.

If you don’t have fresh corn, though, you can instead use frozen, canned, or even leftover grilled corn in this recipe.

In a nutshell, here’s how Mexican Street Corn Soup is made:

And voila—you’ve made yourself a delicious Mexican corn soup!

P.S.: If you’re not a fan of heavy cream, substitute it with coconut milk.

Bold and full of flavor, this Mexican taco soup recipe takes no more than 15 minutes to cook.

Simply toss all the required ingredients in an instant pot and turn the heat to high. Yes, it’s that easy!

Topped with shredded cheese and sour cream, this rice-and-bean soup is not only filling but extremely easy to make.

Cook the tomato paste in about a tablespoon of oil on medium-high heat. Then, add the leftover rice and seasonings into the pot.

Stir for about five minutes before adding the chicken broth (or vegetable broth, if you prefer), beans, and salsa. Cook until the rice is nice and tender.

You can serve this meal immediately, or top it up with cheese and sour cream for a bit of extra flavor. Here’s some rice and bean sides to go with! 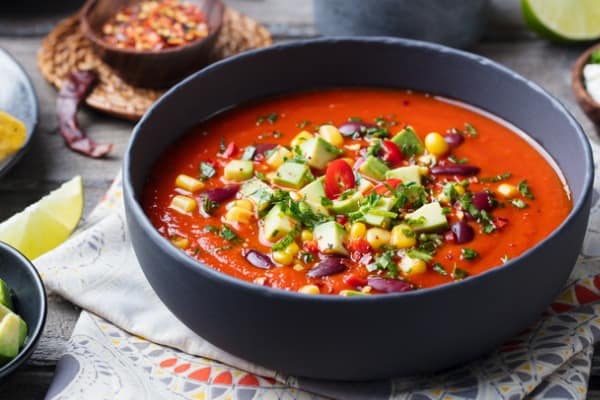 This Smoky Tomato Soup is bursting with flavor. The charred tomatoes add a wonderfully smoky tang and the red peppers add just the right amount of heat to the dish.

To make this dish, blend regular tomatoes, charred tomatoes, and sautéd onion and garlic into a food processor until smooth.

Cook the tomato mixture into a Dutch oven on medium-high, stirring occasionally.

Once the soup has thickened, add in some red beans, bell pepper, and chicken into the soup. Season with salt, pepper, and green onions.

Serve the dish with cilantro and chopped avocado.

To make this recipe, you’ll first have to make a chili pepper puree.

Boil about five guajillo chilis, then put them in a blender with three cloves of garlic and about a quarter of an onion. Blend until smooth, then strain and set aside.

Chop up some of your favorite vegetables (mine are carrots, potatoes, and celery), and toss them in a pot of boiling water.

When the potatoes are fork-tender, add the pre-prepared chili sauce, shrimp, and a bunch of cilantro.

Cook for no more than 10 to 15 minutes and serve with a wedge of lemon. Try these ceviche side dishes to add to your meal!

Like most Mexican soups, this recipe contains large chunks of corn, zucchini, chayotes, and green beans.

Clemole Rojo de Pollo is well known for its chili soup base, which is prepared separately.

Instead of simply tossing chilis into the soup, you’ll first have to allow them to reconstitute for 15 minutes, then blend them with softened tomatoes.

After, you need to cook the chili-tomato blend over medium heat until a loose paste is formed.

Once you make the chili base, everything else is fairly straightforward.

Cook the chicken, toss in some vegetables, then strain the blended chili tomato base directly into the pot. Bring it to a boil and cook for 20 minutes.

Place the soup in a large serving bowl and serve with a warm stack of corn tortillas.

This recipe is served with tortilla strips or tortilla chips, avocados, shredded Monterey jack cheese, and sour cream. It’s basically chicken tortilla but with the added pleasure of soup.

If you have 30 minutes to spare, make this right now. You won’t regret it.

Caldo Tlalpeño is a classic Mexican chicken and veggie soup with a twist.

The recipe is quite similar to Caldo de Pollo, except it’s made with quail, pheasants, rabbits, and other “non-traditional” white meat.

It’s hearty, warm, and delicious, garnished with lots of avocados, lime, and cilantro.

As the name suggests, this dish originated from Tlalpan—a borough located in the south of Mexico City. It basically means “soup made by Tlalpeño women.”

According to the story, this soup was first served more than a century ago by a hawker in the streets of Tlalpan. It was so good that people specifically traveled to Tlalpan to get a taste of her soup.

If I’m being honest, I’d have probably done the same! 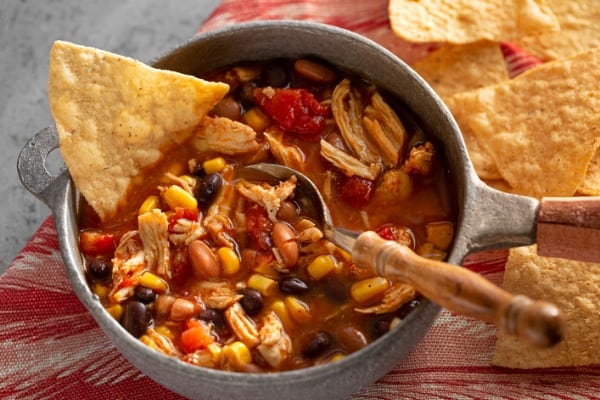 When the soup is done cooking, pretty it up with finely chopped onion, tomatoes, and jalapeño, as well as shredded cheese and roughly crushed Taco chips to add a bit more texture to the soup.

Mexican Vegetable Soup is just like any other vegetable soup, but with a traditional flair.

Alongside vegetables and the vegetable broth base, this vegetable soup is topped with lime juice, diced tomatoes, green chilies, cilantro, and Mexican oregano.

If you want some extra heat, add some jalapeños and cayenne pepper.

You can use any vegetables you like in this soup, but traditionally, it’s made with corn, carrots, zucchini, green beans, and red bell peppers.

Throw the vegetables in the pot after sauteing the onions and pour water or vegetable broth over them.

Bring it to a boil, then reduce heat to medium-low. Let it simmer until veggies are sufficiently soft, stirring occasionally, for about 20 minutes.

Yes, Chicken Fajita Soup tastes as mouth-watering as it sounds.

It’s basically a Mexican version of Pasta e Fagioli, except instead of Italian sausage and pasta, it uses chicken and rice.

It’s also much spicier than Pasta e Fagioli, but that’s just to be expected with Mexican recipes!

To add a bit of creaminess to this dish, mix in dairy-free cream cheese, and garnish with sour cream, shredded cheese, and guacamole. 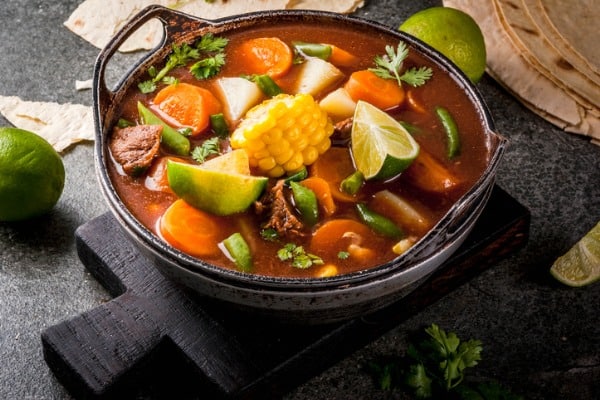