London broil is a high-protein, low-calorie beef cut. It’s still one of the most flavorful steaks.

Unfortunately, cooking more of this meat than you need is a common occurrence, and figuring out what to make with leftover London broil can be daunting.

Believe me, I understand how you feel!

There’s no need to have a repeat of yesterday’s dinner, though.

I’ve put together a list of 15 leftover London broil recipes that’ll breathe new life into yesterday’s dinner while also adding color and joy to those who eat the new dishes.

There are numerous dishes to choose from, so you may find one that piques your interest.

Who knew that Italian and Mexican flavors are a match made in heaven?

I certainly didn’t until I tried this spicy grilled steak caponata recipe, which combines the Italian Caponata and the Mexican salsa verde.

Caponata is a popular sweet-sour Sicilian relish-like appetizer made from eggplants, olive oil, and tomatoes.

Mixed through it is the tart, spicy, and bright salsa verde, this dish is a must-try.

The leftover London broil and crumbly cheese add a filling, creamy flavor to the salad, making it ideal for a late summer night. 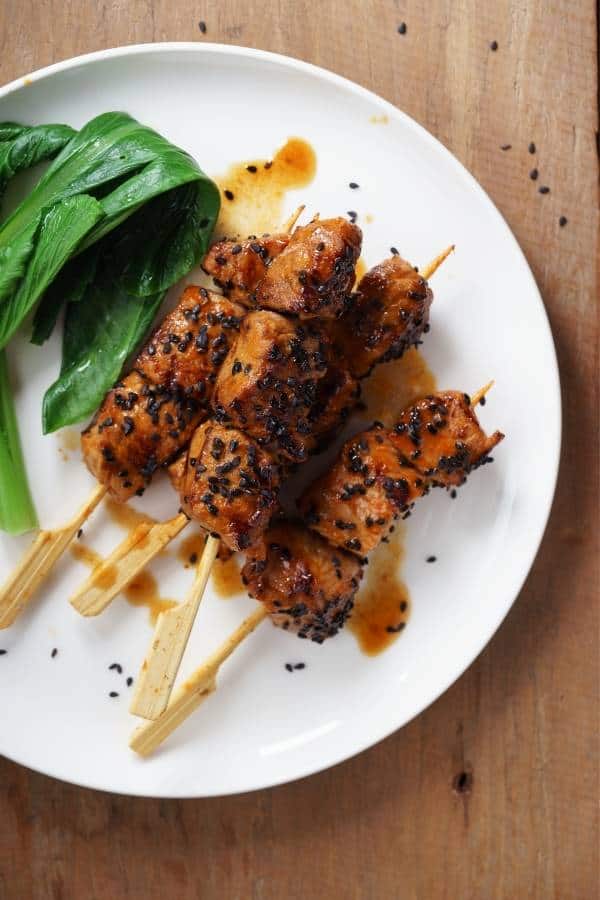 Nothing beats being outside on a summer afternoon eating delicious food. You want the food to be easy to hold and move around with, though.

Glazed with a ginger-garlic-based teriyaki sauce, the pieces of London broil are skewered with sweet bell peppers and onions.

You can marinate the meat overnight or 15 minutes earlier. It’ll taste delicious regardless.

It’s the day after the holidays, and you’ve got an abundance of leftover London broil. Before you eat it as it is, you should try making these mini sandwiches.

The London broil is seasoned to perfection, put in a toasted buttery bun, and topped with mildly sweet Havarti cheese as well as intensely sweet caramelized onions.

All of this mouth-watering goodness is served with a savory, tangy, and sweet au jus that you can dip the sandwiches in.

I could eat this every week and never get sick of it, especially if I mixed it up with some lovely sides!

While you can serve these steak bites as an appetizer or as part of the main course, I think they’re best as a high-protein flavorful weekend breakfast.

All you need to do is cut the leftover London broil into small pieces and fry them in butter.

Cook the garlic in the butter and fat from the meat, then remove from the heat and return the steak bites to the skillet to coat them with the garlic-infused butter.

This leftover beef pot pie is the epitome of a hearty comfort-food dish. The filling is chock-full of melt-in-your-mouth tender meat and veggies, then topped with a buttery, crisp pie crust.

It takes a couple of hours to finish, but you only need to use one pot.

The majority of the time is spent baking the pie and using leftovers speeds up the process.

Everyone will ask for a second helping of food, so the time spent cooking is well worth it.

Do you want to add some international flavor and color to your diet?

This seared steak poke bowl deviates from the traditional poke bowl by replacing the raw salmon with tender London broil.

The meat is cut into cubes and seared, then added to a bowl of rice, colorful veggies, an avocado, and caramelized pineapple slices.

Then, it’s all topped off with a mildly spicy, garlicky dressing.

You simply can’t have leftover London broil and not make stroganoff.

I know what you’re thinking!

While stroganoff may sound complicated, this recipe is easy to make and has familiar flavors.

This Russian delicacy is made with savory beef, umami mushrooms, and a rich, creamy gravy-like sauce.

The London broil adds a beefy flavor and tender chew to this dish, making it more hearty and cozy.

This stroganoff is so delicious that you can eat it with a spoon!

If you’re looking for a quick, simple but nutritious snack, this recipe is for you.

Even if this dish is simple, its flavor profile is anything but simple.

The Asian-inspired flavors of the soy sauce, brown sugar, and ground ginger cut through the vegetal, slightly bitter flavor of the broccoli.

You can enjoy this dish as a quick lunch on its own or create a full dinner by pairing it with a bowl of white rice.

After a heavy dinner, I prefer to keep it light the next day, even if I’m using leftovers.

The succulent, tender London broil will elevate even the simplest of salads. All you need is a bed of greens, cherry tomatoes, and some radish slices.

If you want to keep this meal as healthy as possible, you can skip the dressing entirely.

The fats from the meat and olive oil, mixed with the seasoning, will give the salad a simple yet wonderful flavor. 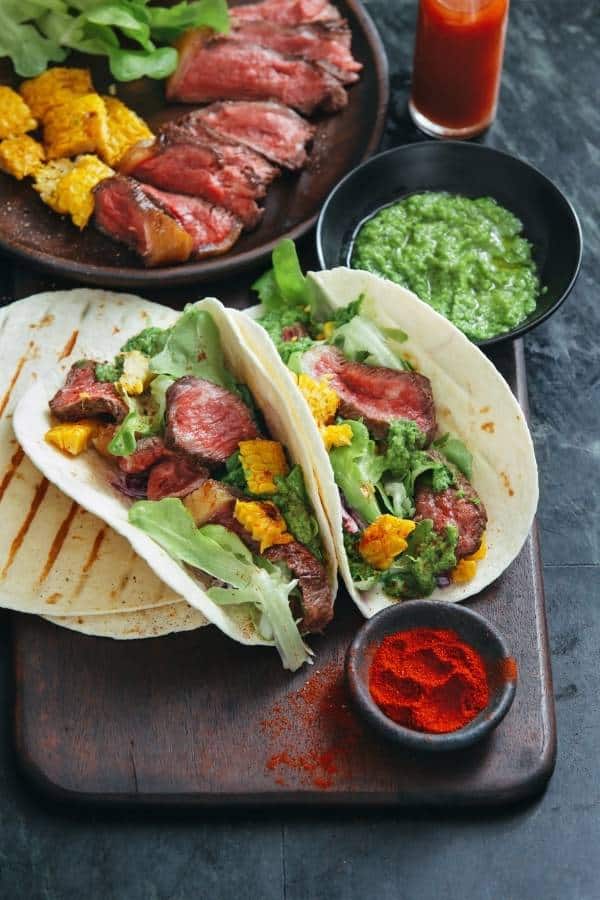 Once the meat has soaked all the flavors, take it off the heat and let it rest for five to 10 minutes.

Then, fill the corn tortillas with a few strips of meat, pico de gallo, and chopped-up corn.

Lastly, drizzle the tacos with the chili lime sauce that you used to reheat the meat.

Well, if you’ve run out of leftover London broil ideas, you should give this recipe a go!

It’s essentially the same idea, except instead of stuffing the savory meat, sweet, grilled vegetables, and melty cheese into a bun, you toss them through pasta.

Are you looking for a hearty meal that requires little preparation for cold nights?

This crockpot vegetable beef soup is packed with protein from the leftover London broil and full of warming, nutritious vegetables.

You only need to add the ingredients to the crockpot.

Leave the soup to slowly cook for eight hours, and the flavors will infuse and intensify without much effort on your part.

In under 15 minutes, you can whip up an Asian-style lunch with just a packet of noodles, leftover London broil, and some veggies.

This chili garlic ramen steak bowl packs a punch of flavors with a few simple ingredients.

All you have to do is stir fry the vegetables, then add the London broil for the last 30 seconds, followed by the noodles.

Toss it all in a scrumptious dressing that’s zingy, umami, and spicy. Yum!

These fluffy pillows of savory and buttery goodness are made from any leftover fillings and ready-made puff pastry.

So, if you have leftover London broil stew or casserole, use it to fill a few puff pastries.

Regardless of how or when you eat them, these fluffy pillows will taste delicious.

This easy-to-make low-carb leftover steak soup is ideal for a cozy winter dinner.

While this recipe calls for sirloin, you can substitute it for any leftover steak, including London broil.

It’s full of savory and umami flavors from the mushroom and beef, with a hint of sweetness from the caramelized onion.

You wouldn’t even have to reheat the leftover London broil. Just add the slices to the soup a few minutes before serving.

London broil, like any piece of meat, spoils more easily and quickly than other foods.

However, if properly stored, London broil can stay fresh and safe to eat for an extended period.

Storing London Broil in the Refrigerator

Wrap the leftover London broil in freezer paper before placing it in Ziploc freezer bags, making sure to remove as much air as possible.

This method keeps the meat from oxidizing and spoiling.

If you won’t be using your leftovers during that time, it’s best to freeze the London broil.

Storing London Broil in the Freezer

To freeze leftover London broil, wrap it in freezer paper and place it in Ziploc freezer bags, just as you would store refrigerated London broil.

In addition to preventing oxidation and spoilage, this method will also prevent the meat’s water content from crystallizing.

If properly stored, the London broil can be kept in the freezer for six to 12 months.

After six months, frozen London broil becomes more prone to freezer burn. It may also lose most of its texture and moisture.

There are three ways you can reheat London broil: 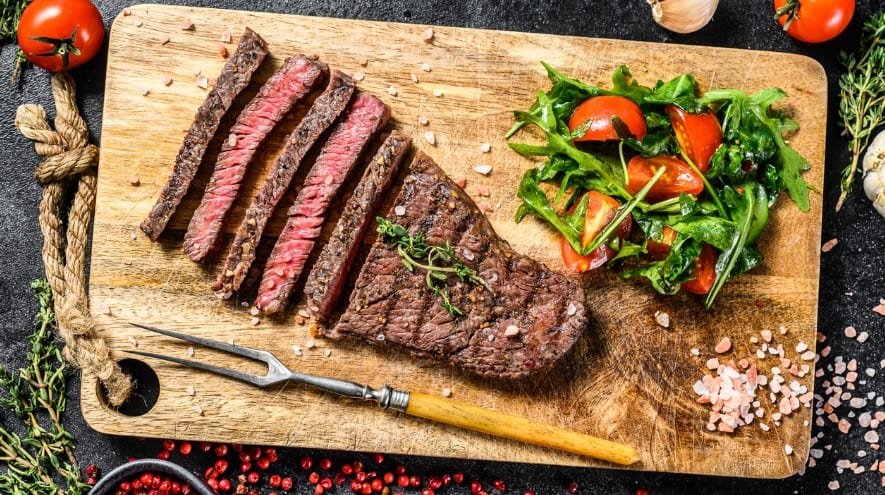 What to Make with Leftover London Broil

Ideas and recipes to cook with leftover London broil