Believe it or not, there’s more to cornbread than what appears at face value.

It works well with so many recipes that it’s basically the unsung hero of the bread world.

It excels in almost every recipe that uses it as an ingredient.

To let the world know of its wonders, I’ve compiled some of the easiest and most delicious leftover cornbread recipes you can try today.

Here are some of my favorite ideas for what to do with leftover cornbread that you can whip up in less than 30 minutes!

Cornbread Pudding is the perfect side dish for holiday meals.

It’s lightly browned and cheesy on the outside and custard-like and savory on the inside.

Although the original recipe calls for cheddar cheese, fresh herbs, and green onions, you can also serve it with bacon, fried egg, corn, or just your favorite cheese.

If you have a lot of cornbread leftover during the holidays, you can use this recipe during Thanksgiving or Christmas dinners in place of traditional stuffing.

Fancify it by topping it up with roasted chestnuts, sausage, and fresh sage.

Made with bacon, cheddar, and jalapeños, this Cornbread Casserole recipe will add some kick to your morning breakfast.

Simply cut up your leftover cornbread into bite-sized pieces, then mix in some bacon slices, ham, scrambled fried eggs, and jalapeño.

Pour just the right amount of milk to soak the cornbread without making it all mushy.

Then, top it up with some cheddar and/or mozzarella cheese, and let it bake at 350°F until the cheese is deliciously gooey and melted.

3. Cowboy Casserole with Cornbread and Chicken

Craving something hearty and comforting after a long day? This Cowboy Casserole recipe is your answer.

Made with chicken, bell peppers, grated cheddar cheese, and creamy sauce, this one-dish dinner recipe is a showstopper.

In a baking dish, crumble up some leftover cornbread and mix it with chicken cubes, chopped onions, bell pepper, celery, corn, and grated cheddar cheese.

Then, pour the creamy sauce made of chicken broth and condensed Cream of Chicken soup over the chicken.

Bake it in the oven at 350°F for about 30 minutes, just until it turns golden brown.

And voilà—you’ve made yourself a delicious family meal with leftover cornbread!

Since this dish is so hearty, you may not be able to finish it in one sitting.

Don’t worry, though: this casserole stays fresh in the freezer for up to two months.

Cornbread Croutons are fantastic additions to salads, chilis, and soups, but they’re good enough to eat as a light snack.

In a bowl, gently toss leftover cornbread cubes with olive oil, thinly sliced garlic cloves, herbs, and your own favorite seasonings and spices.

Scatter the cubes on a baking sheet and bake in the oven at 350°F for six minutes on each side, or until the cubes have crisped to your liking.

Cornbread Dressing Balls are incredibly crisp on the outside and light and fluffy on the inside.

They’re excellent “cheat” appetizers that even the pickiest of eaters can’t resist.

Served with a delicious sour cream and cranberry sauce, this recipe takes less than five minutes to prep.

Simply combine crumbled cornbread with cheese and roll them into 1.5 inch balls.

Then, mix flour, poultry seasoning, salt, and pepper in one bowl, and eggs and milk in a second ball.

Evenly coat each cornbread ball into the flour and egg mixture, then roll them in Panko crumbs.

Deep fry until all the sides are golden brown. So simple yet so tasty! 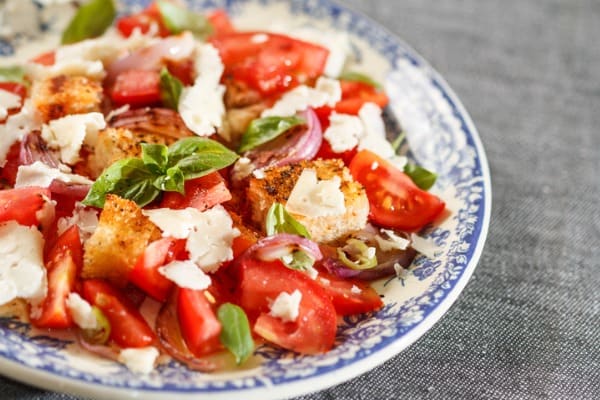 Made with olive oil, heirloom tomatoes, shallots, fresh mozzarella, and basil, this Heirloom Tomato and Cornbread Panzanella recipe is not only healthy but easy to make.

Cut your leftover cornbread into bite-sized cubes and bake in the oven until crunchy. For best results, follow the Cornbread Croutons recipe above.

While the cornbread is baking, toss the heirloom tomatoes, marinated shallots, vinegar, olive oil, and fresh mozzarella in a bowl. Let the ingredients sit and soak the flavors.

Leave the crunchy cornbread to cool for about five minutes and add them to the bowl.

Give the cornbread a few minutes to soak up the juices and top it up with some flaky sea salt and basil.

If you want something warm and filling, this  Buttermilk Cornbread Soup recipe won’t let you down. It’s creamy, thick, and comforting—perfect for a cozy winter night!

To make this recipe, you need about half a cup of crumbled, day-old cornbread and a bit more for garnish.

The cornbread plays a major role in this recipe because it thickens the soup and adds a hint of sweetness to the dish. 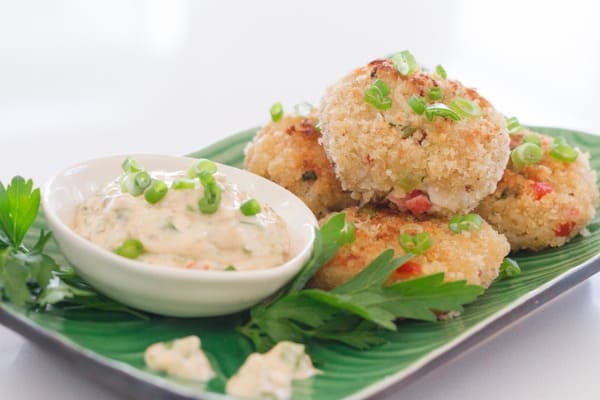 Served with your favorite dipping sauce or eaten without, these crab cakes will make you want to prepare a second—and third—batch.

This cornbread crab cakes recipe is just as delicious as authentic Maryland crab cakes and perhaps even tastier.

Best of all, they’re easy to make. Don’t be intimidated by the recipe’s base ingredient.

Crabmeat is actually versatile and easy to use in recipes like these.

The crab meat patties are made with red pepper, green onion, sour cream, mayo, and beaten eggs, and seasoned with Old Bay, olive oil, and herbs.

Cornbread is the perfect base for this recipe because it adds sweetness to the dish.

Made with leftover cornbread cubes, corn kernels, scallions, and sharp cheddar cheese, this Cornbread Strata recipe will surely claim the center stage in your family dinners.

This dish is basically a cross between frittata and bread pudding. It’s eggier than bread pudding but not as soft as a frittata.

Like most casserole dishes, this recipe is highly adaptable.

Although it’s originally served with jalapeños, you can skip the heat and replace it with green bell peppers.

For a more breakfasty feel, add a couple of strips of bacon.

For best results, make the recipe the night before so the cornbread soaks up the egg mixture.

Bake it in the late morning for an easy but filling brunch with your friends and/or family.

This may sound like an odd combination, but trust me, it’s super delicious. In fact, I like this recipe better than the original!

To make this recipe, simply cut the cornbread into inch-thick squares.

Then, dip them into the egg-and-milk mixture and cook over medium-low heat for three to four minutes on each side.

Make sure to adjust the temperature to prevent it from burning.

Serve with maple syrup, fresh strawberries, or whipped cream. For a bit more flavor, lightly dust it with cinnamon.

For best results, use fresh white button mushrooms rather than canned. If you don’t have yellow squash, substitute it with zucchini.

Also, fresh corn cut off the cob is ideal, but if you can’t find it fresh, frozen corn is almost as good.

If possible, avoid canned corn and only use it as a last resort. This is one of those more unique uses for leftover cornbread. 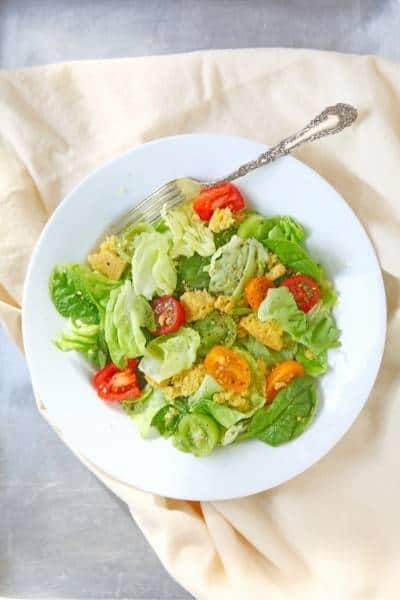 Cornbread Salad may not sound appealing, but it actually tastes fantastic. It’s healthy, too, which is always a plus!

This is my go-to salad whenever I have visitors over for a barbecue. It definitely beats baked beans and green bean casserole because it packs a big punch of flavor.

Toss the ingredients with crumbled cornbread and drizzle a bit of bbq ranch dressing over the dish.

If you don’t have bbq ranch sauce, regular bbq sauce with your favorite ranch dressing will do.

If you really want to impress your guests, use jalapeno cheddar cornbread instead of regular cornbread. It makes a massive difference in taste.

Instead of eating your eggs with toast, mix things up and try this delicious Southern recipe instead.

Friend Cornbread and Eggs is super easy to make; just mix and fry the cornbread with scrambled eggs, jalapeños, bacon, and shredded cheese until you get a spicy-savory breakfast dish.

If you’re not a fan of bacon, substitute it with sausage or any other meat. You can even leave it out entirely if you wish.

Serve with a glass of fresh orange juice and enjoy the hearty breakfast to the fullest.

Honestly, I prefer this one way more than the original. It’s savory and spicy, with just the right amount of smoky-sweet flavor.

This recipe can be served any time of the day, whether it be for breakfast, brunch, lunch, or dinner.

To add a bit of variety and texture to the meal, pair it with your favorite salad.

This Cornbread Pudding with Caramel Sauce recipe is Southern living personified. With its rich caramel sauce, this recipe is soft and decadent.

Word of warning, though: you might want to double and even triple the sauce if you’re serving this dessert to a crowd.

It’s one of those treats that makes people come back for a second, third, and even fourth slice!

RayShowServed with herb gravy, apple or cranberry sauce, roasted garlic, and mashed potatoes, this Turkey Cornbread Meatball recipe will knock your socks off.

As Rachael Ray said: this meatball recipe tastes just like Thanksgiving dinner. It’s a brilliant substitute for Thanksgiving turkey, as it’s just as delicious and festive.

Unlike most of the recipes on this list, Rachael Ray’s Turkey Cornbread Meatballs take a bit of preparation to make.

Trust me, though; it’s one of the best meatball recipes you’ll ever taste.

This pudding-esque Grilled Corn with Cornbread Puree and Popcorn side dish goes well with a ton of meals.

In this recipe, corn is served with a buttery-smooth Tabasco-spiced cornbread puree and garnished with popped corn.

It looks absolutely drool-worthy and tastes like heaven on Earth, and is one of the best recipes for leftover cornbread ever.

That’s only slightly an exaggeration!

How Do You Reheat Leftover Cornbread?

There are multiple ways to reheat leftover cornbread and restore it to its original glory.

Here are three of my favorite ones:

For some really good tips, see our full guide on reheating cornbread to ensure it’s fresh and yummy…again.

How Long Are Cornbread Leftovers Good For?

When left out, cornbread lasts around two to three days at room temperature.

To keep it around longer, wrap it up in a BPA-free food-friendly cling wrap and put it in the refrigerator in an airtight container.

This way, it’ll remain fresh for up to seven days.

If you’ve made a large batch, store it in the fridge. Just make sure it’s kept at a constant temperature of 0°F.

Also, wrap the cornbread in aluminum foil and put it inside a Ziploc bag.

If properly stored, it should last for two whole months (kind of like regular bread before it goes stale – see our list of stale bread leftover ideas!)

What Goes Well with Your Leftovers?

This bread is extremely versatile. It may seem dull and fairly lackluster, but if paired with the right side dish or topping, it’ll transform into a culinary masterpiece.

Check out our delicious list of cornbread sides – prepare your mouth for watering!