The smell of freshly baked baguette is absolutely irresistible. Few of us can resist the temptation, and most people buy a couple more loaves than they need.

The extra baguette usually ends up in the pantry, refrigerator, or freezer. Reheating it after a while rarely gives the desired outcome of a soft core and crispy crust.

In this article, I’ll show you how to reheat a baguette using any available kitchen appliance.

Whether you prefer a microwave, air fryer, instant pot, oven, or a pan on a stove, you’ll find the best procedure here.

I’ll explain the benefits and shortcomings of each, so, you can choose the right approach for reheating your baguette.

Is a Baguette Even Reheatable?

The way any food is made and the ingredients that go into it have the highest impact on how it should be reheated.

Next, we’ll explore the different ways a baguette is made, and what you should consider before reheating it.

Here we go, first of all with the traditional baguette formula:

The Basic Recipe of Baguette

Baguettes are made from three ingredients only:

In its purest form, this bread is mixed with warm water only. It needs a little kneading, but a lot of resting time.

The dough typically rests on the counter for a whole day. Then, it’s dusted with flour, shaped, and placed nicely on a baking sheet.

Here’s the thing though, it shouldn’t go to the oven just yet. A baguette needs a couple of hours more just chilling in the pan.

It should be covered with a towel, and left to slowly rise.

Baguette is best backed in a steamy humid environment. Thus, bakers put a water bowl inside the oven for at least 10 minutes.

Then, the bread should bake dry for 30 minutes

The baguette comes out extra-soft on the inside, with a golden crispy thin crust on the outside.

Other Variations on the Classic Recipe

French bread is a close cousin of baguette. There are a few technical differences in how each one is baked, in addition to size and shape characteristics.

I might not know how the bread is made, but the difference I’ll spot right away is the crust. A baguette comes with a crispy crust, while the french bread is soft throughout.

As you reheat your loaf, you should first decide whether you’d want to keep the crispiness of the crust or its softness.

Some people take the baguette recipe a step further, and they add eggs, honey, butter, and milk. These generous additions, naturally, make the taste richer.

However, this version brings the baguette closer to a brioche rather than the traditional crusty loaf we love. Heating this variation of a baguette would also need some extra care.

The eggs, butter, and milk could easily become too pronounced if you heat the bread too much. Its taste would change drastically, and not in a nice way.

How to Get the Best Reheating Results

The perfect baguette should be soft on the inside, and reasonably crispy on the outside.

If the crust gets too hard or obliterated by mushiness, that’s not a very nice loaf of bread.

Heating in the oven, for the right amount of time, often avoids both extremes.

The softness of the bread should be maintained at all costs. So a bit of remoistening has to be done. That, together with being careful with the heating time.

Finally, the bread should be evenly warm throughout the baguette. If its core is cold, or stale, that really spoils the culinary experience entirely. Also, it should never get burned!

Next, we’ll explain how to heat up a baguette:

How to Reheat a Baguette in 3 Simple Steps 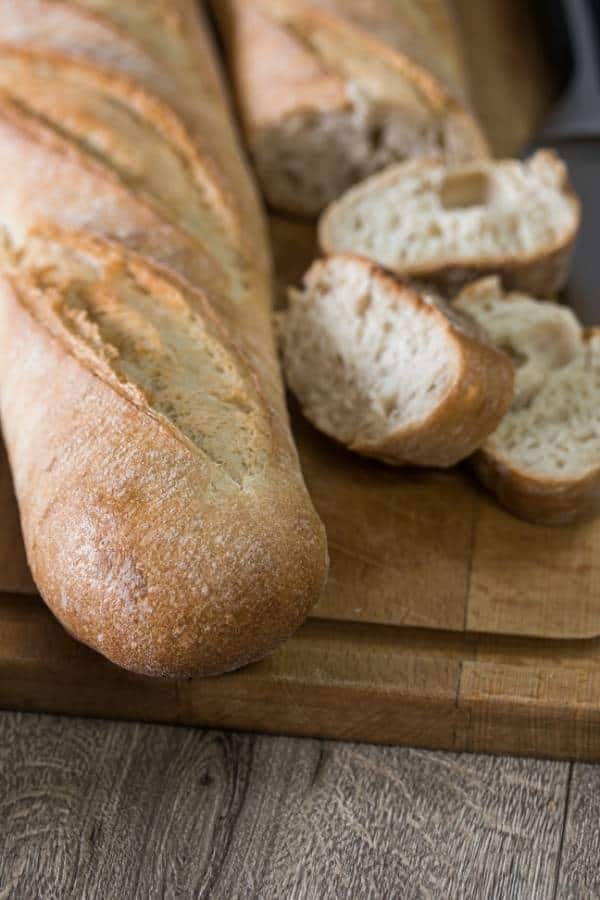 The following are the best ways to do that:

The microwave is one of the best ways to heat up bread. It’s also the quickest way.

However, to maintain its flavors, texture, and freshness, there are a few little tricks that really make all the difference.

You can still use the microwave to reheat a frozen baguette and get wonderful results.

The first thing is to moisten the crust just a little. You can do this with your hands.

Place a kitchen towel around the baguette and pop it inside the oven.

You can add a small bowl of water beside the baguette inside the microwave. This would keep the bread from drying up.

For a frozen baguette, set the time to 30-second intervals, and the power to 70%. Check after every half minute to see whether or not the baguette is ready.

If the baguette needs just a little warming up, a minute in the microwave with a 50% power setting should be sufficient. 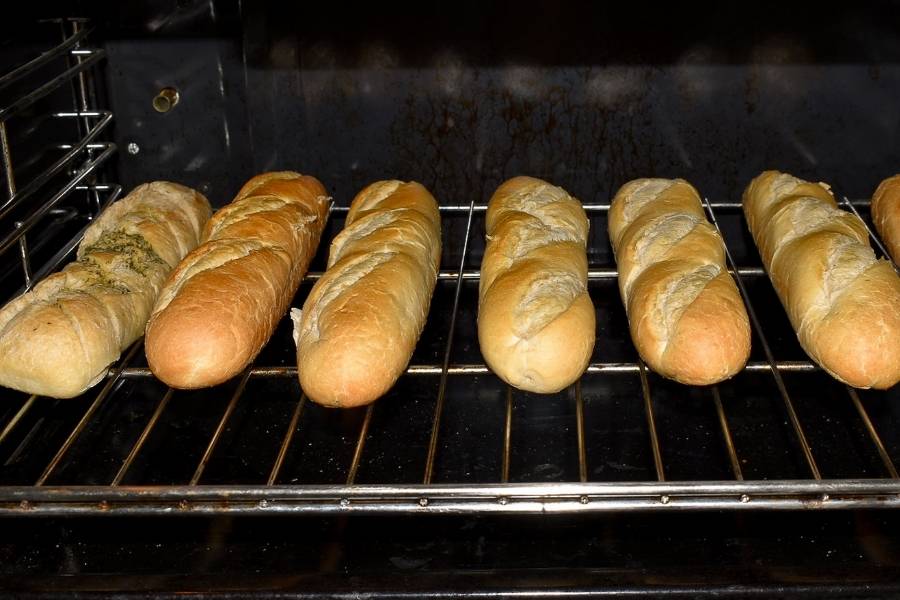 The oven is optimal for reheating a baguette. It provides even warming throughout the loaf, keeps the crust intact, and revives the freshly-baked quality of the baguette.

Moisten the baguette lightly with water, then wrap it up in foil.

Place a bowl of water in the oven to eliminate the possibility of the bread drying out.

The best temperature for reheating bread is 350 °F.

Depending on the size of your oven, and whether or not the baguette is frozen, you might need to leave the baguette inside from 5-10 minutes.

You can unwrap the foil in the last two minutes to give the crust a boost and add the tiniest hint of a crunch.

The only time when the instant pot would be handy for reheating bread is when you’re already using it for making other food.

It’s right there, sitting on the counter, and it can do one more job.

The instant pot tends to make bread a tad more soggy than needed. So, it’s best to use low pressure and the shortest possible heating time.

slice up the bread and place it into the pot. 1 minute is often sufficient to get the baguette thoroughly reheated.

A frozen baguette would naturally need more time, so around 2 minutes should do.

Take the baguette out of the pot as soon as the heating time is up, and serve it hot!

It’s worth noting though that the air fryer would render the baguette a tad more crunchy.

Here’s how to reheat a baguette in an air fryer.

You can brush the baguette with some olive oil or butter. You can also get creative and toss in a dash of seasoning.

Set the time to 5 minutes, then add 1-minute turns if the baguette needs more heating.

A frozen baguette would need double the time in the fryer, so 10 minutes is a reasonable duration.

Take the baguette out, and serve it right away.

Reheating food in a pan might not give the desired outcome.

That’s because the baguette often gets too much heat on the outside, while its core remains cold.

This can be avoided with some tweaks.

Hydrate the baguette with water, and wrap it in double sheets of foil.

It’s recommended to use a pan with a thick base to make sure the heat is well distributed.

Keep the heat at a low or medium-low setting.

Turn the baguette every 30 seconds to heat up all the sides evenly.

It’s essential not to warm the baguette more than necessary, so keep checking if it’s done.

As soon as the baguette is nicely hot and crisp, take it out of the pan, and serve right away. 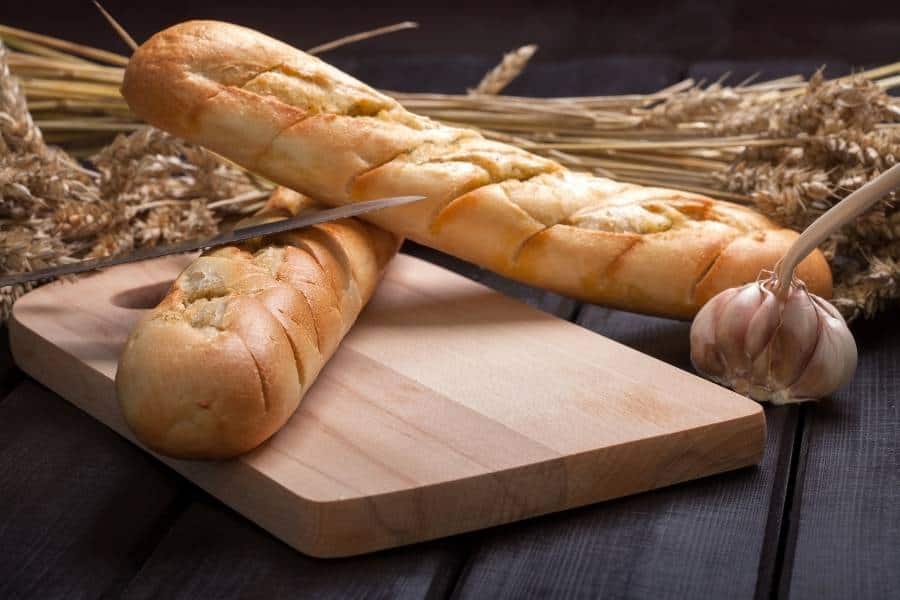 If you have a loaf or two in the fridge, you can recreate the baguette, toss in a few more ingredients, and get some delicious new dishes.

Here are some of my favorites:

I personally don’t know anyone who would resist these pizza bites! Tomato baguette pizza is a special form of crostini. A more delicious form!

Simply, cut up the baguette into slices or quarters, drizzle some olive oil on it, then add your favorite toppings.

Philly cheesesteak is among the most popular sandwiches that few people can resist. It can be served in any meal, and in almost all occasions.

The prep time would be under 10 minutes if you already have the steak. The crispiness and rich taste of the baguette would take this toastie to the next level. 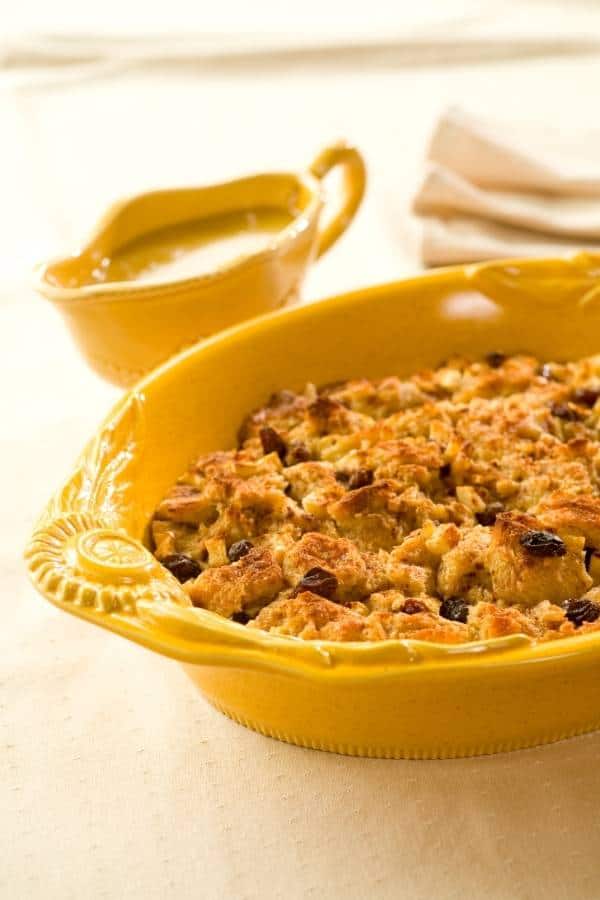 There are many recipes for bread pudding, and each one comes with its unique taste and amazing twists.