I think of twice baked potatoes as a culinary innovation. They just check all the right boxes.

Hearty and fulfilling? Yes, and yes.

It’s the kind of meal that you’ll feel better having around your home.

Which brings us to the question: “How to reheat twice baked potatoes?”

There are a lot of ways to go about heating this kind of meal — way too many ways.

At first sight, things might seem a bit overwhelming. Don’t let it bother you, though.

In this article, we’ll go over some of the best ways to reheat twice baked potatoes with insight into each method’s upsides and downsides.

Is it Even Possible to Reheat Twice Baked Potatoes? 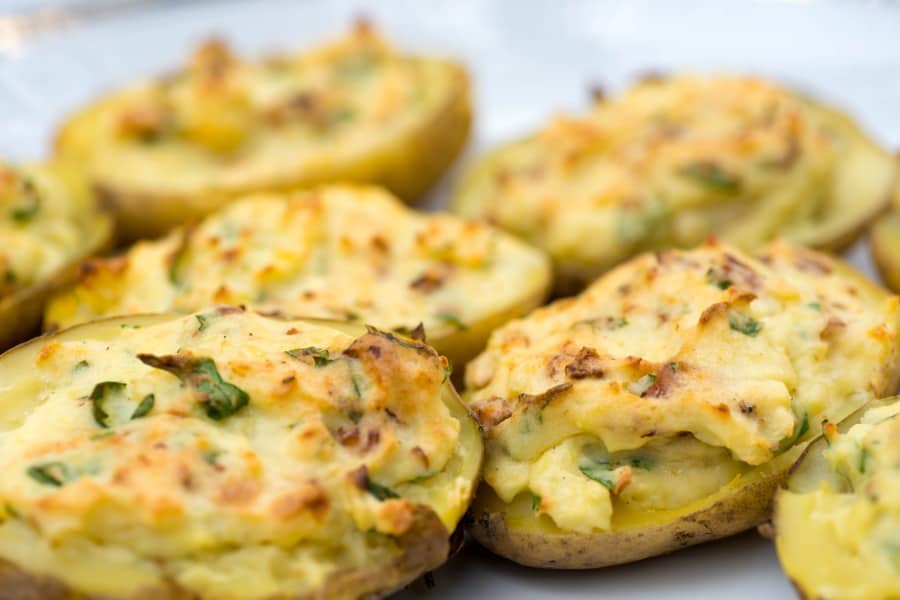 It’s hands-down, one of my favorite dishes to bring to a potluck.

Well, it’s also convenient to bake ahead of time and freeze it. This way, you can save yourself the hassle of fixing large portions on the same day.

A batch of properly stored baked potatoes can last in the fridge for 4-5 days, depending on the kind of stuffing.

Individually wrapped frozen potatoes can last for over a month!

Plus, they are available in a lot of grocery stores as pre-cooked packages.

No one has to know that these are store-bought (we won’t tell if you don’t.)

Once you get the hang of it, you’ll find that it’s one of the easiest meals to reheat.

There’s one small catch, though.

Getting the temperature right can be a bit tricky. People get stuck wondering how long to reheat twice baked potatoes.

Some ways might drain out the moisture, while others can turn the outer skin into a soggy mess.

The key here is to anticipate these problems and stay on top of things.

As a general rule, the oven is the least risky method in terms of texture, aroma, and flavor.

Besides traditional ovens, you can also use a microwave, a grill, an air fryer, or a pan on the stovetop.

Without further ado, let’s get down to business with the five top ways to reheat your leftover baked tubers! 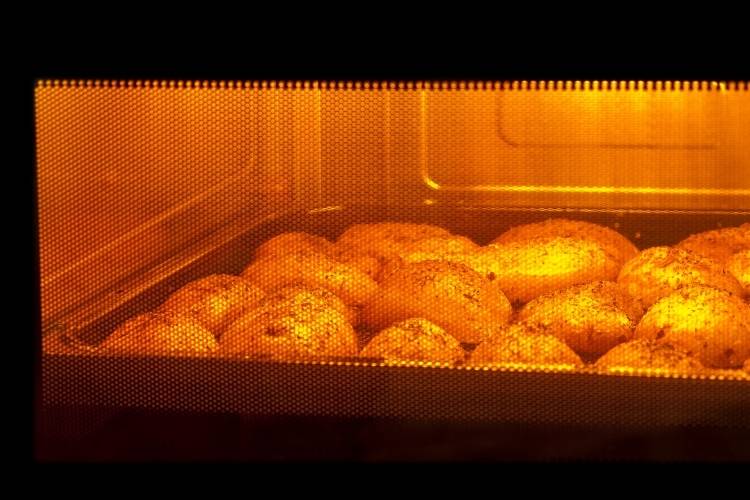 As always, microwaving leftovers is a fast and easy way of doing things. However, it does have its downsides.

Microwaving an already cooked carbohydrate means risking overheating. If that happens, the potato dries out and loses its inner fluff.

Here’s what you can do about it:

A neat little trick that helps preserve the moisture inside the tuber is to wrap it in a wet paper towel.

However, you’ll still be losing a bit of the crispiness. It’ll be more steamed than baked.

Here’s how to reheat twice baked potatoes in microwave ovens:

Ovens are less risky than all the other methods for a simple reason. It’s the same kind of cooking technique that originally made the meal.

This way, you ensure an almost replicated texture and flavor like a freshly baked batch.

You don’t have to worry too much about moisture or drying out like you would with a microwave.

You don’t even have to thaw the frozen tubers to reheat them in the oven.

As long as you use a baking sheet with good drainage, you can throw in the batch, ice and all, into the oven.

In about an hour, you’ll have a steamy carbohydrate meal to enjoy!

Here’s how to reheat frozen twice baked potatoes in an oven: 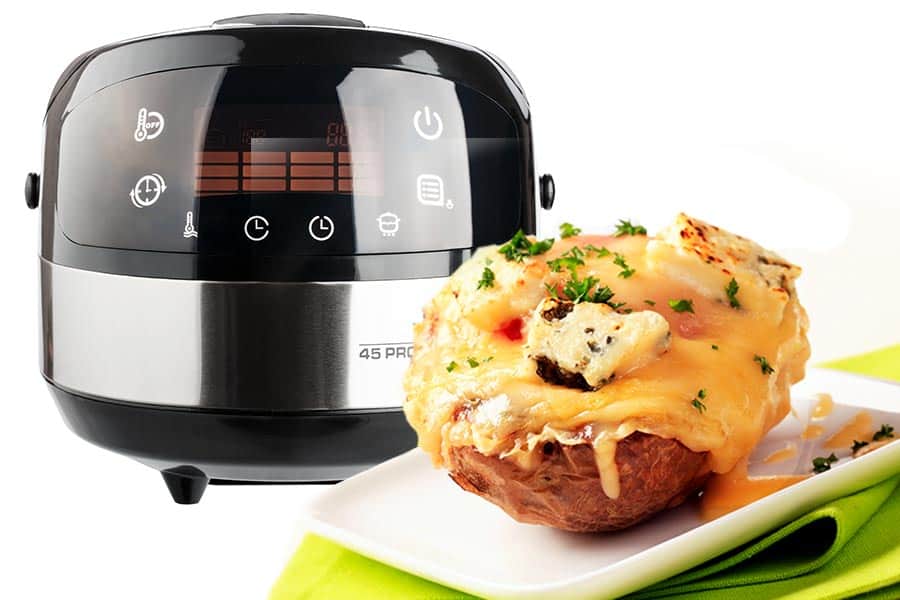 If air fryers can do anything well, it’s crisping.

When your number one palate priority is a strong texture, air convection ovens seem like an obvious choice.

Even if the potatoes are frozen, it shouldn’t be too hard to get a nice crisp with a heating cycle inside an air fryer.

Unlike oven heating, you’ll be fine heating without removing the stuffing in most cases.

You might have to clean up some spills, but it’s nothing too major.

So, what’s the catch?

Well, air fryer baskets have limited capacities. Most of the time, you’ll have to do multiple batches to feed more than three people at once.

Here’s how you can use an air fryer to heat some baked tubers: 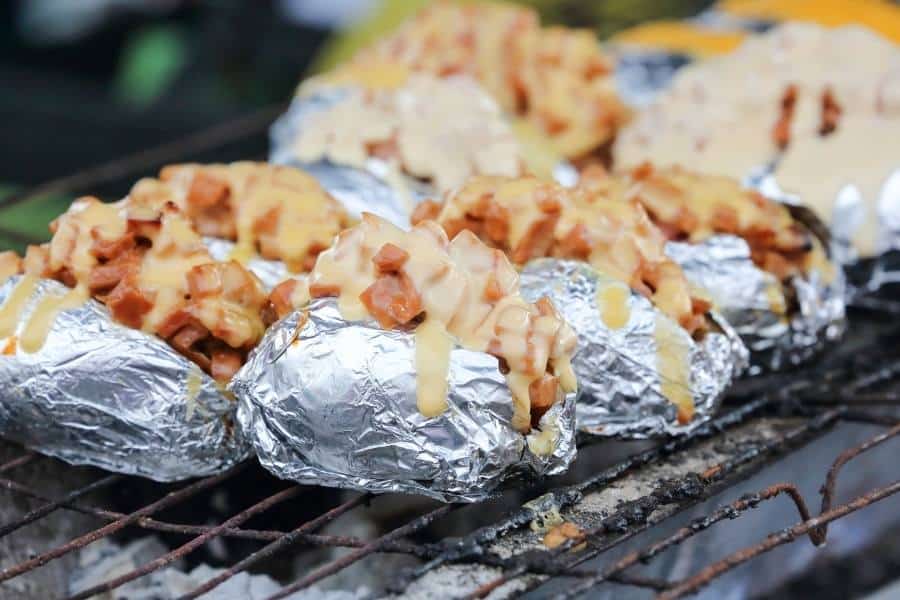 Personally, I wouldn’t fire up my grill just to reheat two or three portions. That’s just too much hassle for little payoff.

But one thing is for sure:

Grilling gives the potatoes an extra texture that you can’t find anywhere else.

I don’t know if it’s the heat distribution or something else, but it’s definitely a pleasant addition.

One other thing to love about grills is their capacity. Generally, a grill will take on more portions than air fryers, stovetop pans, or microwaves.

I’d recommend this option if you have a crowd coming over and you don’t mind spending the day in the backyard. 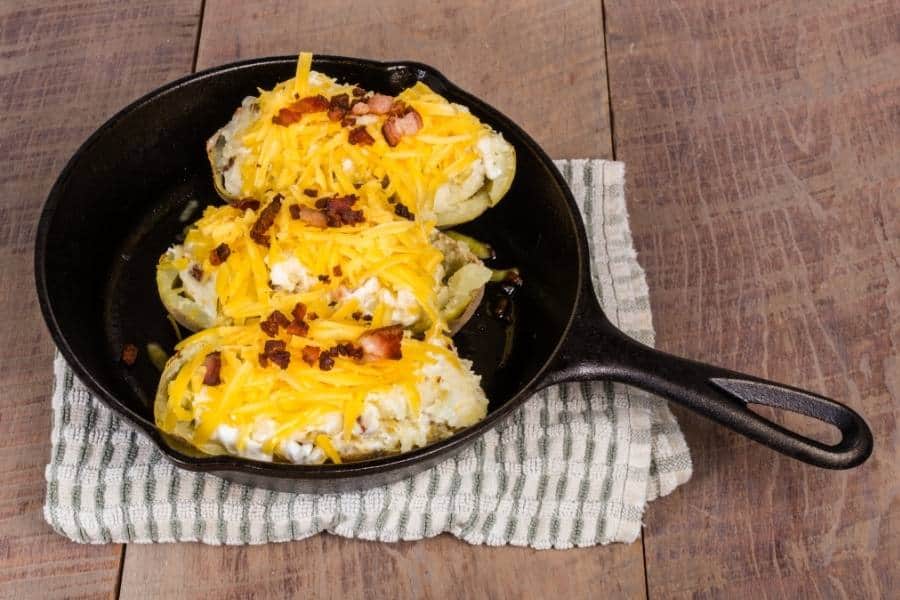 What I love most about this method is that it’s so easy to keep an eye on the progress as you go.

You’ll be able to notice any troubling texture as it forms and fix it quickly.

Which is not always an option with enclosed heaters like the oven, microwave, and air fryer.

With a touch of butter, you get a heavenly flavor!

But hold up a minute.

It’s very common to pour a tad bit more oil/butter than you need and end up with a greasy mess.

To avoid this, I like to brush up the skin instead of oiling the pan itself.

Here’s how you can reheat baked potatoes on stovetops: 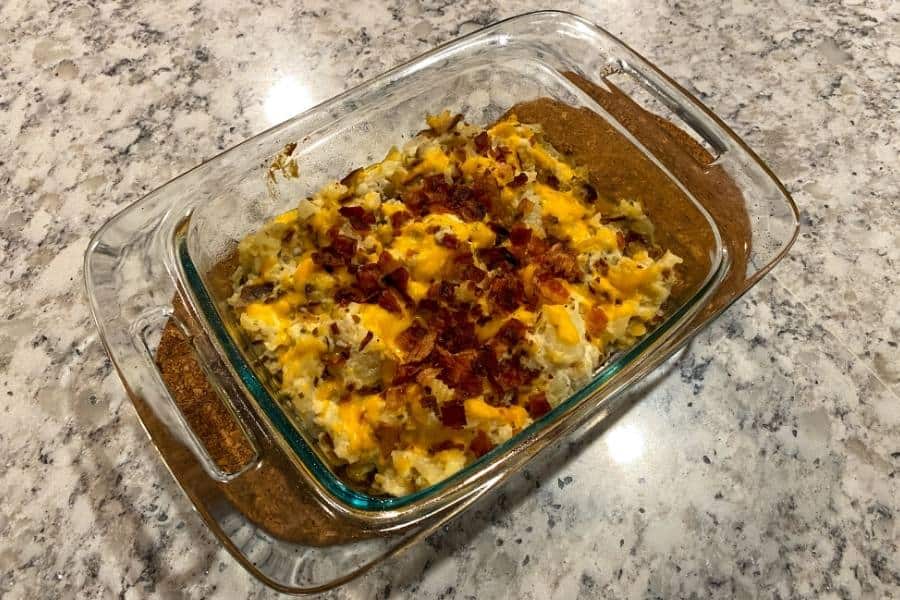 Don’t you always get bored of eating the same meal structure?

Well, with something as versatile as potatoes, you don’t have to limit your palate.

Below are my top three twists on regular twice baked potatoes. Plus, check out our list of what to serve with baked potatoes to amp your meal up even more!

Fix Yourself a Creamy Casserole

What says “comfort food” better than a carb-loaded cheesy casserole?

This recipe calls for bacon, cheddar, and sour cream, but you can easily readjust the toppings to your liking:

What is it that you feel would boost this feel-good casserole? Cheese? Minced meat? Sauteed Greens? Even more cheese?

Dare to dream. After all, the possibilities are endless.

You’ll also be getting rid of the skins, which is probably the hardest part to reheat properly.

Instead of eating your twice baked potatoes with toppings, have you considered mixing them into the toppings?

Yup, you can turn your tuber into a salad with your favorite ingredients by quickly warming up and dicing it into little cubes.

While most recipes use freshly baked potatoes, there’s nothing wrong with using your leftovers.

Just make sure to get them to room temperature before following up with the steps.

It’s also a convenient meal to pack for lunch or take with you on the go.

For more ideas check out our fave vegan toppings for baked potatoes that you can use in a salad as well! 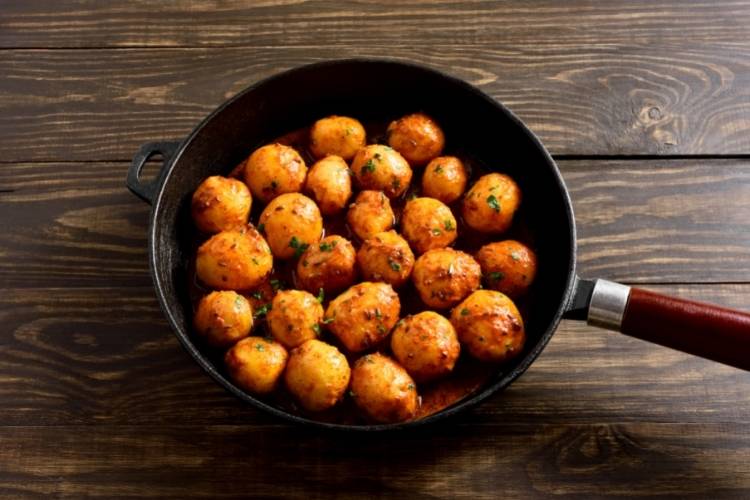 Health recipes aside, deep frying carbs is one of my guilty pleasures, and you might be the same too.

If that’s the case, then you’ll love turning your leftover baked potatoes into crunchy bite-sized balls.

Hey, maybe go overboard and add some cheese and herbs to the mix!

If it sounds simple to cook, it’s because it really is.

All you need to do is remove the skins and mash the inner part. Then you roll little balls, bread them in flour, and in the oil, they go!

Once you know how to reheat twice baked potatoes, you’ll get to enjoy all these delicious meals and more!